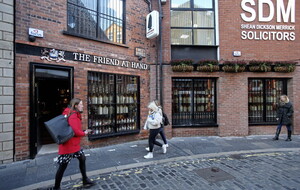 BELFAST whiskey shop, The Friend at Hand, has invested £2million in a museum space to house the largest collection of Irish whiskeys in the world.

The Hill Street venue, which is already a popular draw for tourists in the Cathedral Quarter, is expected to become a major focal point for the ongoing resurgence of the Irish whiskey industry across the north and the island of Ireland.

The Friend at Hand is part of the Commercial Court Inns hospitality group, headed by well-known publican Willie Jack. The group’s venues include The Duke of York, The Harp Bar and The Dark Horse.

Read more: Why the market for Irish whiskey is growing at home

The Friend at Hand Irish whiskey emporium and museum in Hill Street Belfast.

The new expanded space, which focuses on extremely rare Irish whiskeys, has been completely transformed by Carrickfergus-based fit-out specialist McCue.

The priceless collection, adorned with more than 40 vintage whiskey mirrors, surround a remarkable storied carpet, woven in Killybegs by the same factory that produced carpets for the Oval Office in The White House and for Buckingham Palace.

Willie Jack and his late business partner, Bruce Kirk bought the item at auction more than 20 years ago, when he read an article in The Irish Times about the carpet, which once laid on the floor of Bank of Ireland’s headquarters, and thought: ‘I don’t want this going to a skyscraper in New York.’

Commenting on this next phase for the whiskey venture, Willie Jack, said: “Six years ago when we opened The Friend at Hand, we said we would only sell Irish whiskey.

“We’re strict about this - we’ve come under pressure over the years to diversify and offer Scotch, Japanese whiskeys, gin etc. But we stuck to our guns and only sell Irish whiskeys.”

The hospitality figure said he made a conscious decision not to pivot into internet sales during the pandemic, despite the challenges.

“It would have been very easy to package up the bottles and ship them all over the world but I want people to come to Belfast,” he said.

Some of the rate artifacts on display in the The Friend at Hand.

“I want them to come here and have the total experience; enjoy the hotels, restaurants, give trade to the taxi drivers, music venues etc. If they really want the whiskey, they can come to Belfast to buy it.”

Willie Jack said the latest chapter for The Friend at Hand “is unlike anything else in the world and will help to tell the story of Belfast’s whiskey history”.

He continued: “Not only do we have the largest collection of Irish whiskeys in the world by a mile, we have an exquisite collection of extremely rare whiskeys, original mirrors, decanters, and other antiques and collectables, collected over the last 40 years.

“It’s more like a museum than a whiskey shop.”

The Friend at Hand on Belfast's Hill Street. Picture by Mal McCann.

HSBC confirm plan to close branches in Coleraine and Portadown