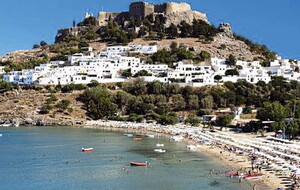 BUDGET airline easyJet has confirmed plans for an expansion of its services at Belfast International Airport, where it will base an additional Airbus A320 aircraft from next summer and also launch a new route to the popular Greek island of Rhodes.

And the move - which coincided with the carrier posting sharply narrowed annual losses after a record summer trading performance - will create up to 40 more jobs at the airport.

The new route between Belfast and Rhodes will launch on June 3, with twice weekly departures on Tuesdays and Saturdays (seats go on sale at easyJet.com from December 7).

EasyJet's UK country manager Ali Gayward said: “The addition of another aircraft will help us to deliver growth in Belfast and offer customers in Northern Ireland an even wider range of destinations, including a direct connection to Rhodes, one of Europe's most popular beach destinations.

“We know holidays are important to people. Not only does travelling connect friends and family, but it offers a wealth of benefits, from promoting wellbeing to experiencing new cultures.

“We've just carried out a survey of 2,000 UK consumers which has shown that almost two-thirds (64 per cent) are planning on flying abroad in 2023, and protecting holiday spend remains a priority for most, as 70 per cent will prioritise a holiday over other expenditure in their yearly budget.”

Belfast International Airport's business development director Uel Hoey added: “For 27 years now easyJet has remained committed to the airport by maintaining a continuous operation and flying over 67 million passengers to and from Northern Ireland.

“We're delighted with its investment of significantly higher capacity in 2023 and particularly welcome the addition on its Belfast network of the beautiful Greek island of Rhodes for the benefit of those forward planning their next summer break.”

EasyJet reported underlying pre-tax losses of £178 million for the 12 months to September 30 against losses of £1.1 billion the previous year.

It notched up its best earnings for a single quarter over the summer, at £674 million on an underlying basis, as the ending of pandemic travel restrictions put overseas holidays firmly back on the agenda.

Chief executive Johan Lundgren said consumers will prioritise holidays as they come under pressure from soaring inflation, adding that bookings for next spring and summer are already looking positive.

But the low-cost carrier cautioned over "market-wide" cost increases and said its first-half fuel expense was set to be more than 50 per cent higher year-on-year due to soaring inflation.

EasyJet is hiking ticket prices in response, with prices looking "strong" for next Easter, though it hopes its budget offering will help it weather the cost-of-living crisis.

"Consumers will protect their holidays but look for value, and across its primary airport network, easyJet will be the beneficiary as customers vote with their wallets."

EasyJet remained in the red over the past year as it was hit by an extra £78 million in disruption and compensation costs caused by the travel chaos over the summer as flights were delayed and cancelled due to staff shortages across its operations and at airports.

This masked a record-breaking final quarter, with its flight programme back to around pre-Covid levels, which helped full-year passenger numbers jump 242 per cent to 69.7 million on the pandemic-hit previous year.

The group said it had already started recruiting for next summer to help avoid the disruption seen in 2022.

It recently launched a cabin crew recruitment campaign focused on the over-45s to boost its workforce.

Mr Lundgren said it had received a "phenomenal" response with applications up 75 per on a daily basis, adding that the group would look to extend the campaign outside the UK.

It is seeing applications outstrip roles advertised, with 19,000 applications for 2,000 cabin crew jobs being offered.

EasyJet added that it would consider deals to expand as smaller rivals across Europe fall foul of the cost crunch, saying it will not "rule anything out".

"There will be a number of airlines that will struggle and don't have the resource to go through uncertainty," Mr Lundgren said.