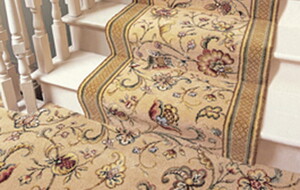 PORTADOWN-headquartered Ulster Carpets has returned to profitability after what it described as “an extremely encouraging financial year” in which it has also made a significant investment in its weaving technology.

The global carpet manufacturer's latest results for the year to March 2022 paint a positive picture after a number of setbacks during the pandemic years.

Continued success in the US contract market and strong domestic retail sales have been supported by the group’s focus on diversification, with Danish carpet manufacturer Danfloor and unique runners and rugs company Roger Oates Ltd, both performing well.

With strong activity in the UK and European contract markets and signs of recovery in the marine sector, the Portadown-based company says it is looking towards next year’s 85th anniversary with cautious optimism.

In his chairman’s statement, Dr John Wilson said, “Operations were appropriately reduced in response to the pandemic.

“But with demand coming back strongly, 2022-23 will see a period of rebuilding capacity with the commissioning of new weaving technology in our Portadown headquarters and in our factory in the north east of England.

“It will take 12-18 months to really see the benefit of this investment and we expect profitability to be affected in the short term as we wait for new capacity to come on stream.”

He added: “While the pandemic has receded to a large degree, it will take another few years before it is finally behind us.

“The war in Ukraine, damage to global supply chains, energy costs and the strong inflationary wave passing through the world will make for challenging trading conditions in the year ahead.

“Nevertheless, the group is committed to retaining its status as a premium global woven carpet manufacturer.”

Ulster Carpets had 608 staff on its payroll at March 31, around in Craigavon and the remainder across its operations in London, Paris, Dubai and across the USA.

Established in 1938, Ulster Carpets remains family-owned and has grown to become the premier supplier of Axminster and Wilton carpets to the residential, hospitality, marine and casino sectors across the world.