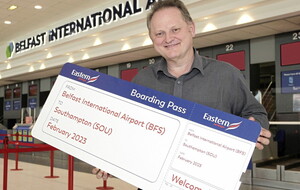 EASTERN Airways is to launch a new daily service between Belfast International Airport and Southampton early next year.

The regional carrier, which is headquartered at Humberside Airport in the north of England, will commence flights from February 9 2023.

The announcement comes less than six weeks after Eastern pulled the plug on its operation at Belfast City Airport.

The airline started flying from the east Belfast airport in early 2017. In recent times, it operated services to Southampton, Teesside and Cardiff.

But it faced increased competition at Belfast City from the Aer Lingus Regional operator Emerald Airlines and the relaunched Flybe.

Eastern Airways, which already operates a Dublin to Southampton service, plan to use a 72-seater ATR aircraft for the Aldergrove flights.

The airline’s commercial director, Roger Hare said: “This is a major step in growing connectivity to the north of Ireland from our Southampton base.

“The recent reduction in operator capacity and choice from Belfast airports and a growing network and ambition of Belfast International Airport offers an opportunity to meet the burgeoning demand for connecting the two nations especially with such strong onward connectivity.

“This welcome addition to the domestic network at Southampton and Belfast International will aid those who travel for business, visit friends and family or seek a welcome city or leisure break.”

He continued: “Adding the new Northern Irish destination of Belfast International significantly improves critical connectivity between the UK’s regions. We continue to ensure the right services are being offered given Eastern Airways is all about supporting the regions of the UK, connecting people and places, so growing our English South-Coast hub network and capacity to a high-demand capital city in both directions is a crucial part of increasing connectivity and aiding economic recovery to both business and the UK’s vital tourism sector where sustainable.”

“Eastern Airways will add a completely new string to the bow at Belfast International Airport as a long-established and successful UK regional airline, and their fleet gauge and flexibility will potentially in time open up a range of new regional destinations for the convenience of the travelling public which have hitherto been of insufficient market size to be offered by the current low cost jet operator partners at BIA.”