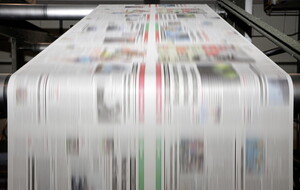 IRISH News-owned print operation Interpress has signed a heads of agreement with Belgian media group Mediahuis to take on the printing of the Belfast Telegraph from the start of next year.

Mediahuis Ireland, which publishes the Independent Group of newspapers, confirmed on Tuesday that it will close its Newry operation - its last remaining print site in Northern Ireland - in December.

The printing of the Irish Independent and Sunday Independent national titles, as well as a number of regional newspapers, will transfer to the Irish Times' printing plant in Citywest in Dublin from January.

And the Belfast Telegraph will then be printed at the Irish News' award-winning sister company Interpress, which already prints the Sunday Life among its portfolio of nearly 50 daily, weekly and bi-weekly/monthly titles - that's close to 750,000 newspapers every week.

Interpress production manager David Wilson said: “We're delighted to have secured this major printing contract with Mediahuis, which complements our current business model and offers our dedicated and hard-working staff and their families long-term job security.”

In June Interpress scooped the National Newspaper Printer of the Year title for the fifth time at the Irish Print Awards in Dublin, which recognise the country’s best companies in the print and press sector.

Among the stable of 27 weeklies coming off the presses at Interpress are Farm Week, the Newry Reporter, Tyrone Courier, Banbridge Chronicle, Co Down Spectator, Ballymena Guardian, Strabane Weekly News and Donegal News.

Mediahuis, which has owned the former Independent News & Media group of newspapers since 2019, blamed reduced newspaper volumes and rising costs as reasons for closing the Newry facility.

In a statement it said: “The intention to close the printing press is a direct consequence of escalating costs, including substantial distribution costs given our current location, as well as ongoing difficulties with securing the necessary skill sets and resources.

“Our priority is on protecting the future of our business by responding to the changing needs of our industry, and to ensure a future sustainable publishing model as we continue our transition to a digital focused news organisation.”