Around Noon boss pledges to double down on Newry investment 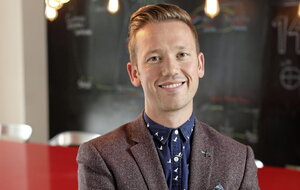 FOOD-to-go company Around Noon has pledged to double down on its investment in Newry after posting a strong recovery in sales last year.

Group revenues at the sandwich and bakery specialist grew by 48 per cent to £22.5 million in 2021, with the workforce expanding to 361.

The company significantly narrowed its losses last year, as its continued to pivot the business toward the convenience retail and airline markets.

And despite the challenge posed by food inflation in 2022, chief executive Gareth Chambers said he expects the business to return to profit this year.

Recalling the first lockdown as “a complete shock to the system”, the 37-year-old said Around Noon initially lost 80 per cent of its clients overnight.

That prompted a new business strategy that has resulted in major investment.

Some 33 years after the business started on the Chambers’ family kitchen table, the Around Noon operation now includes a food facility, bakery and print business in Newry, as well as food manufacturing site in London.

In developing its new strategy during the pandemic, Around Noon’s 2017 purchase of Slough-based Chef in a Box, has proved key. Now rebranded Around Noon London, the site’s proximity to Heathrow has left the company well placed to target the airline market for its food products.

“As a result we are now supplying airlines on both islands, including holiday airlines and some premium business airlines,” said the chief executive.

“We’ve actually grown quite significantly in that space, which has been great. It’s quite an exciting pivot and an exciting move.”

And while the Northern Ireland Protocol has been “a mixed bag” for the business, chiefly in the challenges of moving ingredients from Britain to the north, Around Noon was ideally placed to benefit from major supermarkets switching to island of Ireland suppliers.

“A number of companies who had been sending food across the water decided to source locally. And that local sourcing policy has seen us benefit quite well actually.

“It is a bit of double-edged sword in many respects.”

The food industry boss said the business is continuing to grow, with recruitment and investment plans ongoing.

“Our head count is significantly up on pre-Covid and we have a really strong pipeline of new opportunities, so we’re hiring continuously right across the businesses,” said Mr Chambers.

“We’re continuing to scale at pace and we’re looking for really good talent. We’re doubling down, we’re investing significantly in keeping Newry as our central hub.

“We’re quite passionate about our local community and Newry and Mourne as an area and we want to continue to invest there.”