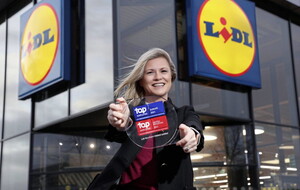 GERMAN retailer Lidl has committed to to paying the Real Living Wage for more than 1,000 workers in the north.

They are among 400,000 worker employed by UK businesses that have volunteered to increase hourly rates from by £1 to £10.90.

Lidl said the new voluntary rate, which will apply from March 1 2023, will mark the second pay rise inside 12 months for its staff in the north, representing an investment of £1.4 million in additional wages.

The German supermarket chain was the first major employer to commit to paying the Real Living Wage in 2015. The rate is set by the Living Wage Foundation.

Maeve McCleane, chief people officer at Lidl in Northern Ireland said: “Our people have always been pivotal to our success which is why we continue to make sure that Lidl Northern Ireland is not only an exceptional place to work but also provides an unrivalled inclusive, rewarding and fulfilling culture for every employee.

“As part of our commitment to our employees, we are delighted to confirm a new pay rise for more than 1,000 team members across the region which matches the rates advocated by the Living Wage Foundation.

“Lidl Northern Ireland continually reviews its pay rates to ensure it offers the most competitive compensation and benefits to attract, train and retain its best employees to help serve more than 300,000 local shoppers every week.”