Ground-breaking sports protective set has its roots in Tyrone 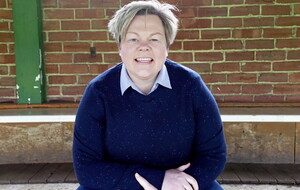 A TYRONE entrepreneur is at the forefront of protective tech which is set to revolutionise sports across the world.

Judith McMinn from Dungannon has designed Halos, a ground-breaking sports headband which protects the brain from concussive and sub-concussive impacts.

It is the first and only CE-marked sports protective wearable of its type in the UK and Europe.

Judith (41), who attended Royal School Dungannon, played hockey as a teenager, and repeatedly questioned why players protected their shins and teeth but not their brain.

Over more than two decades, Judith has been designing Halos, seeking input from world-leading experts in fields including cognitive impairment disorders, brain injury and next-generation wearables during the design and testing phase of the product.

She said: “To me there was an obvious gap, but no one was providing a solution. I spoke to experts in the relevant fields so I understood what was causing degenerative brain disorders in players of contact sports, and I also researched the technology available in protective wear.

“The resulting Halos headband has been tested using recognised, international standard methods of independent, rigorous, and as far as possible, reality-based laboratory testing.

“I've heard sports players talk about feeling their brain move inside their head. That is what happens when there are rotational forces to the head, caused by angled impacts, both during matches and in training.

“The brain is not designed for angled impacts, so there is inevitably damage as the brain rotates by up to 5 millimetres inside the skull. It's vitally important to reduce the rotational forces, to protect the brain and prevent the damage that builds over time, often without the player having any idea that they have suffered.”

Halos, made by Rezon, is the first and only legally approved sports protective wearable of its type in the UK and Europe, having been subject to independent testing at US test house Virginia Tech.

Judith added: “It's key that players, clubs, coaches, parents and those with a duty of care understand the risk of brain injury in sports, and that they appreciate what makes effective brain protection. The Rezon Halos provides essential protection for all players.

“The brain is the most important organ in the body, defining performance on the pitch and in life. I want every player, the youngest, those who play for fun, and professionals, to have the chance to protect their brain.”