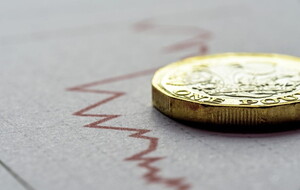 The Bank of England has announced it will hike interest rates to their highest in more than 13 years and indicated it believes the economy is already in recession.

The central bank had previously projected the economy would grow in the current financial quarter but said it now believes Gross Domestic Product (GDP) will fall 0.1%.

It comes after a reported 0.2% fall in GDP in the second quarter and would mean the economy is currently in recession.

A technical recession is when the economy shrinks for two quarters in a row.

The Bank’s Monetary Policy Committee (MPC) decided to raise rates to 2.25% – their highest since November 2008 – from 1.75%, in an effort to grapple big increases in the cost of living.

In committee minutes, it said the “tight labour with wage growth and domestic inflation” above targets called for a “forceful response”.

Nevertheless, the hike was below the expectations of the financial markets, who had predicted a 0.75 percentage point hike in line with the rate increase announced by US Federal Reserve on Wednesday.

The MPC came to the decision after five members of the nine-strong board voted for the 0.5 percentage point increase, including Governor of the Bank Andrew Bailey.

The decision to lift rates is a bid to keep inflation under control. It is the best tool that the Bank of England has to steer inflation – currently at 9.9% – back to its 2% target.

Downing Street declined to comment on the Bank of England’s decision to raise the interest base rate.

A Number 10 spokeswoman said: “That is obviously a matter for the independent Bank of England.

“I would point you to the support that we’ve set out to help people with the cost of living, which we know is a concern for families and businesses across the country.

“I’d point you to the support that we’re providing and the immediate assistance we’ve provided for energy bills in particular.”

The pound fell after the Bank of England announced it would increase interest rates from 1.75% to 2.25%.

One pound could buy around 1.1364 dollars shortly before the announcement at midday. Minutes later it had fallen by 0.7% to 1.1287.

But sterling is still higher than where it had started the day, after a rally in the morning.

The British Chambers of Commerce said the Bank of England faced a “balancing act” in trying to keep inflation under control.

“The decision by the Bank of England to raise the base rate to 2.25% is further evidence they are taking a hard line on tackling inflation,” said its head of research David Bharier.

“Our research shows that unrelenting inflation, largely driven by rising energy costs, is by far and away the top business concern at present.

“But the Bank faces an increasingly tricky balancing act. The interest rate is a very blunt instrument to control inflationary pressures that are largely driven by rocketing energy costs and global supply chain disruption.

“The Bank’s decision to raise rates will increase the risk for individuals and organisations exposed to debt burdens and rising mortgage costs – dampening consumer confidence.”

He said that businesses want a “plan to address the short-term drivers of inflation as well as a long-term strategy to promote investment”.

Liberal Democrat Treasury spokeswoman Sarah Olney said the interest rate rise would be a “hammer blow to struggling homeowners who are being punished by the Government’s failure to control inflation”.

“This monster rate rise could have been avoided if Conservative ministers bothered to take action sooner on energy bills and the rising cost of living,” she said.

“Instead, the Bank of England is left with no choice but to hike mortgage costs for millions.”

She said Liz Truss should “bail out families and pensioners who will suffer as a result of this mortgage hike”.