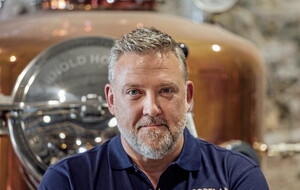 ONE of the north’s most experienced energy industry executives has said governments north and south of the border should be looking to the “super profits” being made by generators to keep wholesale energy costs down.

Mark Prentice is the former managing director of both Firmus Energy and Bord Gáis. He’s now the commercial director of Copeland Distillery in Donaghadee, which like thousands of other SMEs, is facing massive hikes in energy costs.

The rapid increase in costs come as Copeland marks a significant breakthrough in the North American market.

“I suppose the energy costs have really blindsided us. If we look at energy costs last month versus 12 months ago, they’re up over 100 per cent and the concern is, how far will those costs go over the next six months?

“For a business like ours which relies on energy to create the products, which we know we have markets for internationally, it’s a big concern.

The Copeland Distillery in Donaghadee.

“We’re actually quite a big employer in a relatively small town, so it’s important to us that we continue to grow the business and try and manage all of our costs and energy is one of those which is just very, very difficult for us to manage.”

“In reality it’s the wholesale energy costs that are driving up bills, it’s the generators, it’s the producers of oil and gas,” he said.

The commercial director said the energy regulators on both sides of the border should be looking at whether those returns could be utilised to keep wholesale costs down.

“That ultimately is the only way of keeping energy bills down," he said.

“Otherwise we’re going to have an awful lot of tax for a long time, to basically put cash in people’s pockets to pay the bills over the next 12 to 18 months.

“We hope politicians are listening, we hope the inertia that we are seeing at Stormont can be pushed aside.

“Because this is a crisis for business and we need it sorted now.”

“I am deeply concerned that as businesses in Northern Ireland face a perfect storm of rising prices, spiralling costs and rocketing inflation," she said. "The challenges facing them are not being treated with anywhere near the level of urgency required by either our Minister for the Economy here at Stormont, or by the British government."