Work on major apartment scheme to begin next to Titanic Belfast 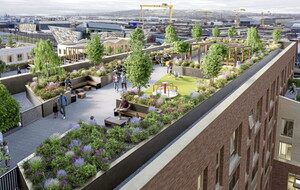 Artist's impression of the Loft Lines apartment scheme, with TItanic Belfast in the background.

WORK on a major new apartment scheme next to one of the north’s most popular tourist attractions is set to begin within weeks.

Ground is expected to be broken on the £117 million Loft Lines Titanic Quarter project next month, after the developers Lacuna and Watkins Jones finally secured a legal agreement with Belfast City Council on Thursday.

The local authority’s planning committee granted approval for the 778 waterfront apartments next to Titanic Belfast in April this year.

But it has taken another four months to nail down the section 76 agreement required for formal planning permission to be issued.

It’s understood the developers are close to securing an agreement with a construction firm to carry out the work, which should begin in September.

The area around Titanic Belfast is set be dominated by construction work for the next few years.

The company was granted planning approval in January 2020 for a 276-bedroom hotel next to the Titanic attraction, but submitted a new application in response to the pandemic for a £36m development comprising 156 hotel rooms and 98 aparthotel units.

A spokesperson for the JMK Group said work won’t begin until “early Spring 2023”, with the project due to be ready for guests by the summer of 2025.