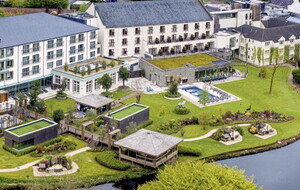 THE group behind luxury Galgorm Resort and Spa near Ballymena and a raft of other hospitality businesses has got back on track after haemorrhaging turnover and profit in the teeth of the Covid pandemic.

Tullymore House Ltd, parent of the Galgorm Collection and whose other interests include the Fratelli Group of pizzerias, the Rabbit (formerly the Templeton Hotel at Templepatrick) and 1614 Ltd, had taken a £10 million hit between 2019 and 2020.

But latest accounts filed at Companies House reveal that the hospitality giant - whose main shareholders are the millionaire Hill brothers Nick (60) and Paul (56) - is firmly back in growth mode across all areas of the business.

And while still short of the record 2019 turnover of £26.7m, the group is firmly in growth mode, and will expect to get back to at least that level of revenue in the next 12 months given its existing plans across its whole portfolio.

Employment rose in 2021 to an average of 749 people - up on the previous year's figure of 593. Most of the additional workers (152) were on the production side.

Over the last year, he has been a driving force of a growth spurt across the Galgorm Collection group.

At its flagship Galgorm site, the company is in the throes of a £30 million investment, which it will undertake over the next five years.

That project includes a £10m new accommodation offering along with plans to further expand and enhance its thermal spa facilities.

In May the group it said it would open a residents-only a spa facility this autumn at its newly acquired Old Inn in Crawfordsburn.

It is also understood that the venue's 18-room boutique hotel on Belfast's Ormeau Road, which is still waiting to pass a number of planning hurdles, will be called The Raven, in keeping with the theme used for its Templepatrick property The Rabbit.

The group plans to put a restaurant in the church area of the site, formerly Holy Rosary Church, which is expected to become a foodie destination, appealing to residents and non-residents in keeping with the Ormeau Road's growing reputation as a food destination.

However, the hospitality group's plan is facing fresh objections from locals after the developer made an application to extend licensing hours from 11pm to 1am.

In April 2019 Galgorm Collection received permission from Belfast City Council to transform the 19th century listed building and an adjacent parochial house building, which has been derelict since 1980.

The £8 million plan by Fratelli Ormeau Road Ltd involves the demolition of parts of the parochial house and change of use of the whole building to an 18 bed hotel and licensed restaurant.

But when the applicant varied the conditions set by Belfast City Council to extend its restaurant opening times from 11pm to 1am on Friday through to Sunday, residents in nearby Bell Towers and Fitzwilliam Avenue submitted 23 letters of objection.

Council planning officers are recommending approval of the extension of licensing to 1am, but the matter has been deferred for elected representatives to attend a site visit.