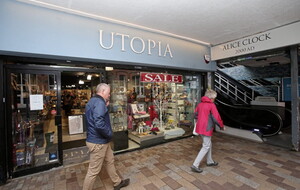 BELFAST will bid a fond farewell to the iconic Utopia gift store this autumn as it closes after 43 years.

Gift shop owners the Fitzpatrick family, who also own the Fountain Centre, Irish News and Q Radio, said the closure marks the end of an era, but also a new beginning for the centre.

The unit housing Utopia, which has for decades been a go-to for shoppers seeking original gifts, will become a reception area for the company’s Q Radio station and the Irish News, which is relocating from its existing headquarters at Donegall Street.

Director Anne Sykes said her late father Jim Fitzpatrick and mother Alice opened the Fountain Centre as a “place that was alive and where people could go and enjoy”.

She says that intention will still be present in the re-shaping of the Fountain Centre.

“My parents wanted to create somewhere lovely to relax when they opened the Fountain Centre,” she said.

“They always said cities should be very much places that should be for the whole community to enjoy.

“Utopia was my mum’s shop and it has been a very important part of the life of the Fountain Centre.

“It’s kind of significant now with the whole shift of the business to integrate everyone together and give the Fountain Centre a new lease of life.”

Ms Sykes said the upper levels of the centre will be house staff from Q Radio, the Irish News and Farm Week.

She said the decision to close the gift store was just part of an evolving layout, adding: “Even though more people are shopping online, that did not determine the closure, because Utopia is one of those places where people like to come in and interact with the staff. It offers a personal experience. That aspect of having chat in the shop is what will be missed.

“Many people have a lot of memories there, and one of the things that Utopia always aspired to be was a very welcoming place where people could have a browse and relax.”

Manager Ian Megrath, who has worked at the store for seven years, described the closure as “bitter sweet”.

He said: “Utopia is a huge legacy and testament to the Fitzpatrick family. It was a locale, where people would meet up to go to, a destination store and a real boom to the Fountain Centre and that area.

“We’ve had customers come in over the years and regale us with their stores and while it's sad it’s closing, it’s an exciting new chapter for the centre and the Irish News.

“I’m proud to have worked here for so long and I’m happy to be part of that chapter.”

Ms Sykes said a lift shaft will be put into the Utopia store unit as well a reception space that will be open to the public, but its exact shape and role has yet to be finalised.

The Fountain Centre opened around 1978, making it an architectural icon at the time in the city thanks to its unique piazza level and on-street escalators as well as subtle art deco features.

In the year 2000 the Fitzpatricks installed the Alice Clock, in honour of the late Alice Fitzpatrick.

Located on the piazza level, it is the only automation clock in Ireland.

It features 24 bells that play on the hour from 9am until 6pm with hand-crafted figures emerging.

Made in Lubeck, Germany, the clock is a hidden gem in the city. Its bronze bells were cast in Whitechapel Foundry in London, which is most famous for re-casting Big Ben and being the original manufacturer of the Liberty Bell, a symbol of American Independence.

“The Fountain Centre is a legacy of what mum and dad really had in mind for Belfast,” said Ms Sykes.

Full price stock in the Utopia store will have 30 per cent off from today.