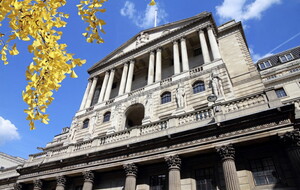 The Bank of England put up interest rates by 0.5 per cent - its highest single movement since 1995

THE Bank of England has confirmed its largest rise in interest rates in 27 years and warned that the UK is set to enter "a year-long recession" this autumn as inflation soars to 13 per cent.

Interest rates rose by 0.5 per cent to 1.75 per cent in a move by the bank to curb spiralling inflation by making borrowing more expensive, thus discouraging spending.

Household borrowers are hurt, especially those on variable or tracker mortgages (roughly a third of all mortgages in Northern Ireland), which will rise typically by £59 a month on a £200,000 property.

The bank's monetary policy committee (MPC), which voted by eight members to one in favour of the increase, said: "Against the backdrop of another jump in energy prices, there had been indications that inflationary pressures were becoming more persistent and broadening to more domestically driven sectors.

"Overall, a faster pace of policy tightening at this meeting would help to bring inflation back to the 2 per cent target sustainably in the medium term, and to reduce the risks of a more extended and costly tightening cycle later."

The Bank added: "Inflationary pressures in the UK and the rest of Europe have intensified significantly in recent months. This largely reflects a near-doubling in wholesale gas prices since May, owing to Russia's restriction of gas supplies to Europe and the risk of further curbs.

"As this feeds through to retail energy prices, it will exacerbate the fall in real incomes for UK households and further increase inflation in the near term by more than forecast in May - from 9.4 per cent in June to just over 13 per cent in the fourth quarter of this year."

The bank is not only forecasting the worst inflation in 40 years, but a full blown recession that will start this autumn, when expects buying and selling activity to start shrinking, staying that way for the whole of next year.

Business groups in Northern Ireland believe that a series of interventions will be required to businesses ride out the storm of pressures and challenges facing them.

Neil Hutcheson, head of policy at FSB NI said: “Nine out of 10 SMEs tell us that costs are now at a record high, driven primarily by ballooning prices on fuel, utilities, product inputs, labour shortages and tax increases, so it will require a suite of interventions to help fix the issue.”

He added: “We know the task of tackling inflation is a difficult one, but a jump in interest rates will compound the pressure on small businesses, at least in the short term, as increased costs of finance for small businesses are met with a decrease in consumer spend.

“We need to see politicians at Stormont putting themselves in a position to make decisions on the areas for which they hold responsibility, such as energy costs and business rate reliefs. At the same time, the UK government can assist by reversing the hike in national insurance, cutting VAT and fuel duty.

“The cost-of-living crisis cannot be solved without solving the cost of doing business crisis – if we must bring down inflation, we must do so using the full range of interventions possible.”

Angela McGowan, director at CBI Northern Ireland, said: “Despite early signs of some pipeline price pressures fading, it's clear we're in for a hard winter, and with further energy price rises potentially on the horizon, support for the most vulnerable households and businesses should be kept under review.