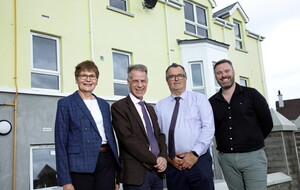 RESIDENTS of a new Portstewart housing scheme for the over 55s will begin moving in later this month.

Choice Housing's £1.5 million The Hill development, which has been in the making since 2020, aims to serve a housing shortage in the area.

Based close to the harbour, it includes nine new “affordable” apartments with underground parking.

Located on the former SHAC site, it will offer independent living and alleviate some of the housing pressures in the area, including lengthy waiting lists for properties in the north coast area.

Choice Group chief executive Michael McDonnell said: “Evaluating the demand for housing in a specific area forms part of our decision-making process when it comes to investing in new developments.

“It's been clear for a number of years that there is a growing need for housing in Portstewart and the wider north coast area.

“The waiting list continues to grow and unfortunately investment in new housing schemes is not keeping up with the demand. The Hill will provide new homes for up to 26 people and we have plans for further investment in more quality housing in the area.”

Mr McDonnell added: “This new development offers the chance for new residents to be part of an attractive and thriving local community, which is a vital element of our schemes. Choice is committed to delivering further developments like this in an effort to address the ongoing housing deficit.”

The project, which included the demolition of the existing property, and a full design and build was led by lead contractor Brendan Loughran & Sons based in Omagh.