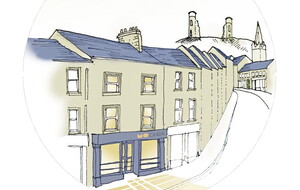 'Moghrá' will open in the former McGrath's pub at 55 Irish Street.

AWARD winning chef James Devine is set to realise a life-long ambition by opening his own restaurant in his home town of Dungannon.

Four years after acquiring the former McGrath's pub in the historic Irish Street, the Tyrone man has finally secured planning permission for ‘Moghrá'.

Taking its name from the Irish for ‘my love', and with a nod to the former owners, the new restaurant is expected to open next year, representing a major boost for Dungannon's town centre.

“We've been waiting a long time on planning,” said James. “It was probably one of Dungannon's worst kept secrets!”

A former contestant on BBC's ‘Masterchef Professionals' and ‘Great British Menu', the Co Tyrone chef was crowned National Chef of the Year in 2017.

His CV includes stints at Michael Deane's Michelin-starred EIPIC in Belfast and Noble in Holywood.

But his heart has always been set on what he calls his “passion project”.

“I have been looking to do something on my own for a while now. All chefs eventually want to open their own place in their own home own,” he said.

“It was always the dream to own a restaurant in the place where you're from.”

A former a patron of McGrath's, the chef said he's keen to tap into Dungannon's rich cultural history.

The chef has hopes of opening a pop-up venture at the location in early 2023, but it will be late 2023 or early 2024 before all work is complete.

“I would like it to be an experience. I want a lot of openness, I want people to be able to see into the kitchen and blur those lines between front of house and back house.

“If you work there you're involved in all aspects – the chefs could be serving your food as well.”

A part-time lecturer, James acknowledged the number of young people seeking a career in the kitchen has been steadily dwindling in recent years.

“There's just not the same volume of people going into this industry,” he said.

The challenge in sourcing staff will likely limit Moghrá's capacity to the 50-55 mark.

“To be honest anything bigger, I wouldn't be able to handle.

“It's not going to change any time soon. So we need to be smart in our approach and how we pivot around that.

“I'll be running the kitchen. It'll very much be like a home for me. All my thought processes have been driving towards this project for a long time.

“We've got planning, but we've been sitting on a lot of ideas, a lot of thought has gone into this and there will be even more now we can actually start to implement some of them.

“I'm doing something I've wanted to do for some time and breathing life into the area, for me it's a win-win."