Richard Ramsey: Hiking season has begun . . . time to head for the hill WE'VE become well used to price hikes with rampant inflation, but last month was marked by tax hikes with the increase in national insurance contributions hitting the pockets of many employees as well as employers. The attention now though is very firmly on interest rate hikes with the Federal Reserve having just delivered its first 0.5 per cent rate increase in 22 years with more to come as the Fed seeks to tame inflation which is at 40-year-high.

In the UK, the Bank of England's Monetary Policy Committee (MPC) raised the bank rate to 1 per cent this month, its fourth consecutive hike - a first in the 25 years since it was granted independence - as inflation is set for a 40-year high too. Three members of the committee wanted to see rates rise to 1.25 per cent, and Governor Andrew Bailey made clear that these hikes won't prevent inflation from rising further, but judged they were needed to prevent it becoming entrenched.

The European Central Bank (ECB) also looks set to jump on the rate hiking bandwagon having indicated that it will start to raise some of its key interest rates in July. And we're seeing movement all around the world. Indeed, Australia recently increased its key rate for the first since 2010.

Many will cry 'what the heck are they doing', as interest rate hikes bring even more pain to consumers who are already suffering from steep price rises and rising taxes. But as the Bank of England Governor indicated, central banks need to do something. And the context is that the price of money is still incredibly low by historical standards. More mortgages are now also on fixed rate deals than during the last financial crisis. So, people are less exposed to the rises than they may have been in the past.

There is also an argument to be made that more pain now means less pain down-the-line in the form of a prolonged period of higher rates of inflation. Indeed, central banks want to take the heat out of certain aspects of the economy. But there is a balance to be struck as people fear that rate rises could engineer a recession.

Many are referring back to what happened in the US in the 1980s. Then, Paul Volcker, who was chair of the US Federal Reserve and at 6 foot 7 inches arguably the tallest central banker in history, cranked up the Fed funds rate to 20 per cent in June 1981. He saw this as the only way to stem rampant inflation. It worked, but it led to a significant recession and US unemployment rose above 10 per cent as a result.

The current chair of the Fed, Jerome Powell, is trying to do the opposite - deal with inflation whilst engineering a 'soft-landing'. History isn't on his side though. In the last 50 years, almost every time the Fed started a series of rate increases it led to a recession. However, whilst history isn't on his side, some of the current economic indicators perhaps are. The labour market is in rude health and indeed some might say it's red hot with record levels of vacancies and unemployment very low. These characteristics are also applicable to the UK and many other economies.

Financial markets have been pencilling in several more rate hikes in the UK, topping out at 2.5 per cent. If that is to occur, the BoE reckons the UK economy will flirt with recession and a dip in output. But in many respects, the threat of recession should be a secondary, perhaps even tertiary concern given the scale of the cost-of-living crisis. Personally, I only expect one more interest rate rise, possibly two, and Rishi Sunak will undoubtedly have to unveil a significant package of measures to ease the evolving cost of living crisis.

Whether or not we see a recession remains to be seen, but the impact of the hike in interest rates and the expectation of more to follow have already had implications for financial markets in terms of equities and currencies.

In relation to equities, the old investor adage is to sell in May and stay away until St Leger's Day (in September) but this year we may see investors coming back in May after the marked sell-off in recent months. Global equity markets largely escaped when the pandemic took hold bar some initial falls. Equity markets have since soared as central banks around the world pumped trillions into the system. At one point in 2020, the Fed was effectively printing one million dollars per second.

Last year was dubbed the 'everything rally' from stock markets to crypto currencies, and from property to second hand cars. But stock markets and crypto currencies are all down year-to-date and Wall Street's S&P 500 Index has had its worst start to a year since 1939 (20 per cenr below its record high in January). Meanwhile, the tech-heavy Nasdaq is already in a 'bear market', down 30 per cent from its peak last November.

Rising interest rates are basically calling time on this remarkable era of cheap money. When the cost of money was almost at zero, speculation was rife and investor appetite struggled to be satisfied. Aggressively raising interest rates, coupled with fears of a global recession has popped that bubble. All of this has implications for everybody around the world through for instance pension funds.

Consumers going on holiday, particularly to north America, will also notice that there has also been an impact on exchange rates. Given that the Fed is expected to raise interest rates by more than the ECB and the BoE, the dollar has soared. Conversely, sterling has slumped. Last May the sterling to dollar exchange rate hit a high of $1.42 whereas it has recently hit $1.21.

Again, consumers are impacted by interest rate rises in the form of the price of petrol. Oil is priced in dollars but is purchased with sterling. So as the value of the pound goes down, all things being equal the price of oil goes up from a currency perspective. As a result, on March 8 it hit a record high of almost £98 per barrel.

The appreciation in the dollar and rising interest rates are also bad news for many lower income countries around the world. Indeed, there's talk of an emerging debt crisis. Not only are countries in Africa and the Middle East impacted by soaring food and energy costs, the cost of the debt that they loaded up on over the past decade when the price of borrowing was so low has surged due to significant parts of this being priced in dollars and linked to US interest rates. All of this means that there is an expectation that poverty rates globally will surge. Northern Ireland poverty rates will surge to given the cost of living crisis.

Indeed, last week NISER stated that 43,000 households in Northern Ireland will see their food and energy bills rise above their disposable incomes. Clearly things are going to get worse and politicians need to get to grips with it sooner rather than later. In this environment, it will become increasingly untenable for Northern Ireland's politicians to remain out of power and not head for the hill. 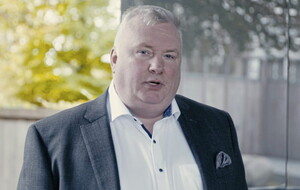