FOUR-in-five businesses in the north plan to furlough some or all of their staff in the next week, a new report suggests.

The survey conducted by the Northern Ireland Chamber of Commerce has exposed the extent of the impact Covid-19 has already had on the local economy.

Three quarters of firms have reported a significant fall in revenue, with almost two-thirds (62 per cent) stating they have less than three months of cash reserves left.

One-in-ten businesses said all cash reserves had already been exhausted.

The research, carried out with accountancy firm BDO, was conducted between April 1-3, two weeks after the Chancellor announced the job retention scheme, the UK Government’s commitment to pay up to 80 per cent of salaries (capped at £2,500) for workers laid off, but kept on the payroll.

Almost one-in-three (30 per cent) said they intend to furlough all employees, with 58 per cent intending to furlough at least half their workforce.

Just 17 per cent said they did not intend to furlough any staff.

Cash flow remains a massive issue for many firms, with just four per cent stating that they have more than 12 months of cash reserves available.

Chief executive of NI Chamber, Ann McGregor, said the negative impact on business and the economy reflected in the survey is startling.

“This cash flow issue is being exasperated by slow or non-payments and difficulty accessing the various funds.

“Even where there is some activity on order books, businesses are finding that customers are becoming increasingly reluctant to pay quickly, worsening the cash flow problem.”

The NI Chamber’s research is published alongside a separate report by the British Chambers of Commerce today, which found that just one per cent of businesses had successfully accessed the Coronavirus Business Interruption Loan Scheme (CBILS).

The scheme was intended to offer UK Government-backed bank loans of up to £5m to help businesses survive the current crisis. But left to the discretion of banks, firms have reported difficulty in accessing the loans.

Announcing reform to the loan scheme on Thursday night, the UK Treasury admitted that 130,000 enquiries had produced less than 1,000 approvals.

Stormont has already announced its own package of support for businesses, including a three month rates holiday and cash grants of £10,000 and £25,000 for small firms.

As of Monday, the Department for the Economy said 13,187 businesses had received the smaller cash grant, with another 1,603 applications being validated.

But there have already been sustained calls for the Executive to respond to businesses who have fallen between the cracks for the current funding streams.

“Firms may be able to avail of rates relief and furlough staff but they can’t survive without income and in this challenging time are anxious about increasing their debt,” said Ann McGregor.

“They also cannot afford to wait weeks or months for reimbursement from the various support schemes to arrive.”

Brian Murphy of BDO said the hospitality, manufacturing and services sectors in particular had felt the impact.

“In order to survive it is critical that businesses assess the immediate consequences of Covid-19 on their operations and take independent and objective advice to develop a plan to get through the coming months.

“Open and transparent communication with your bank and all stakeholders is key and by working together in partnership, we at BDO have already seen that solutions can be found.”

Steven Hammell: Time for Motherwell players to show they are up for the fight 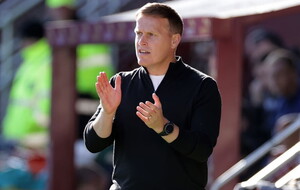