The story of the women who fought to save Regina Coeli women's hostel in west Belfast is being brought to the stage. Playwright Louise Matthews tells Gail Bell she is hoping the power of theatre will help move the story on with the opening of a new facility 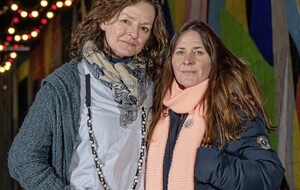 THERE is an activist within all of us, asserts north Belfast playwright Louise Mathews with the easy tone of someone who is prone to see a cause, pick it up and run with it.

The Gaiety School of Acting graduate has penned the real-life story of the female workers and volunteers who occupied Regina Coeli House in west Belfast last year in a bid to keep it open and "save lives".

Staff began a 'work-in' at Northern Ireland's sole 'women only' supported hostel after its management announced that the building needed £500,000 of repairs and had to close. Workers were suspended but stayed on to help women needing addiction and mental health support.

Now, their remarkable story is set to hit the stage at the Lyric Theatre in a collaboration between Unite the Union and Kabosh Theatre Company, which are jointly staging Not on Our Watch at a number of venues this week.

"I was approached by Paula McFetridge of Kabosh, turned up to a meeting and by the end of it, I was enthusiastically writing the script," says Mathews, who has overcome adversity herself after being diagnosed with post traumatic stress disorder (PTSD) resulting from spending a large chunk of her childhood ducking bullets flying over her home in Ardoyne.

"The story – a true one - just grabbed me straight away. I love a story about people going above and beyond and this was really one like that - just normal people finding something extraordinary within themselves to try to bring about change."

Not On Our Watch is described as "a searing account" of events which began with a closure announcement for the building on Lake Glen Avenue, owned by the Legion of Mary – a Catholic voluntary organisation - and ended with a 12-week occupation, with the aim to shed a light on the women at the centre of the storm.

"The story ends with the promises made by the authorities to have enhanced, women-only services in place by May 2022 - but this still hasn't happened," says Mathews, who trained as a youth and community facilitator in the arts.

"We are all hoping that the play will serve as a reminder to those in power that the women who so desperately need the vital services and supported living offered by Regina Coeli hostel have not been forgotten."

The former Pride of Britain nominee (for overcoming adversity) and winner of a Young High Achiever Award presented by the Prince's Trust, spent hours interviewing workers and volunteers to get "to the heart" of the story.

"I really wanted to focus on the women's point of view," she says. "The commonality was their belief that lives are literally saved at this facility – that is it in a nutshell. Regina Coeli did not just provide a roof over the head of women who found themselves homeless in Belfast – it did so much more than that; it provided supported living so that women with complex needs, whether due to addiction or mental health issues, could get the help they needed.

"There was nowhere else for these women to go. They couldn't go to Women's Aid and a mixed hostel would not be a good environment for any woman going through a trauma involving violence with men or for women rescued from sexual trafficking. That would not provide the space they need to build themselves back up."

Writing the script has been "a gift" for the writer and is, to date, one of the pieces of work she is most proud of.

"My sister used to have a hash tag for me – #COTD – which is shorthand for 'Campaign of the Day', because I was always constantly campaigning for something," she says.

"Equality has always been a big thing for me, alongside women's rights and women's issues, and really, just the most vulnerable in society.

"The women I talked to all said, 'Look, there are women from judges to architects to every walk of life who have come through these doors' and yet we tend to think of hostels as a place that helps someone who is down and out.

"Every single woman, no matter what their class, culture, background, education, could find themselves needing that hostel, so I was aware of the importance of expressing that – the idea that we are all in this together and we're doing it for each other."

:: Not On Our Watch is showing in Belfast this week at: the Deer's Head today as part of the Out to Lunch Festival; Brassneck Theatre in Hannahstown tomorrow; the Little Theatre Bright Umbrella, Castlereagh Street, on Friday; The 100 Club at the Duncairn on Saturday; and the Lyric Theatre on Sunday.

There is an activist in all of us