Actor Sean Kearns is leading a glittering cast in new Christmas musical rom-com, The Shop at the Top of the Town. The West End stalwart tells Gail Bell how the show reminds him of 'magical' childhood Christmases in Belfast, how being rejected for drama school never held him back and why he will always be the one cooking Christmas dinner 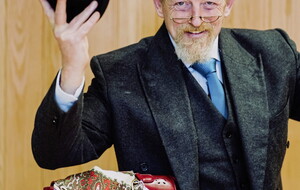 SECURITY barriers, a drunk Santa and elaborate festive window displays everywhere you look... it is Christmas in 1970s Belfast and actor Sean Kearns is feeling the nostalgia.

The Newry-born actor is relishing his latest role as department store owner, Felix Hoffman, in The Shop at the Top of the Town, a new 'Christmas musical rom-com' at the Theatre at the Mill, Newtownabbey, which sets out to recreate 'the glory days' of Belfast's great department stores.

“I was only seven in 1972, but it's funny how you remember those type of Christmases and the pure magic of them,” says the actor who has worked with the Royal Shakespeare Company, tread the boards in West End musicals and appeared on TV family favourites, Vera and Ballykissangel during a 35-year career on stage and screen.

“You went through that ring of steel, the security barriers, to get to the shops, then you were searched before going into the shops and then, once you were inside, it was like being transported into another world.

“The magic of the shop window displays is something I always remember, of going into those big department stores like Robinson & Cleaver and Anderson & McAuley, of making your way up the staircase or in the elevator to the toy department on the top floor - and of entering this winter wonderland. The magic took you away from the reality of what you had just walked through.”

But even though the glitter is falling - and sticking to everything - all is not rosy in Felix Hoffman's 'Shop at the Top of the Town' and some “underhand things” are going on, the former Ulster Youth Theatre alumnus, reveals.

“Felix has a whole shopping list of festive woes,” says Kearns of his “caring” but beleaguered store boss character. “The new security barriers are affecting trade, some members of his faithful staff have their minds elsewhere and the store Santa is having problems staying sober...

“This is musical theatre, of course, so there is also a lot of singing and dancing up and down a staircase. It's great to be able to be able to invest in a new character in a completely new piece of work like this – when I went into Wicked or Billy Elliot or any big show, you literally are walking in someone else's footsteps, but with a new show, you get to create an original footprint which is always lovely.”

Walking his own path is something the 57-year-old has always managed to do, despite being rejected for drama school in the early days when he was just starting out.

“I was gutted, of course, but I came home and just got on with it,” he recalls. “I was a member of the Newpoint Players in Newry and then I was with the Ulster Youth Theatre which was a brilliant training ground and opened doors for me. I was lucky to get a season with the Royal Shakespeare Company – I ended up doing two seasons, back to back.

“One of the shows, The Taming of the Shrew, transferred to the West End and that was my first sort of West End show. The first proper, commercial one, was The 39 Steps at the Criterion theatre and from that, things just opened up and I went into Billy Elliot, then The Commitments and after that, Wicked.

“I had to pinch myself, especially not having been to college, that, somehow, I ended up at the RSC and did two years with the Globe Theatre in London - a wee boy from a housing estate in Newry with no university degree and no formal drama college training. It was unreal.”

A Comedy About a Bank Robbery came next, with Kearns playing one of his all-time favourite roles as bank manager Robin Freeboys in Mischief Theatre's acclaimed fast-paced farce – again at the Criterion.

“Loads of roles have been out of my comfort zone and this was one of them,” he laughs, “but I do think you grow into yourself as you get older and there comes a time when you become very comfortable with your physicality and who you are. For me, it was about not putting limits on myself and being brave enough to go, ‘You know, what? I am going to try that...'

“When I got the call about A Comedy About a Bank Robbery, I went over to London to see the show the night before the audition and I thought it was just incredible, but I also thought I could do it. I wasn't intimidated by it, I just thought, ‘It's a big man with a deep voice who barks all the time.' Luckily, the small, younger ones did all the physical stuff – it was like Mission: Impossible when they came down on the pulley and hovered over the diamond...”

Hard work, determination and “grit” – he doesn't mention it, but also talent - paid off for the prolific performer whose film credits include The Boxer with Daniel Day Lewis and Angela's Ashes, based on Frank McCourt's Pulitzer prize-winning memoir.

The downside of long contracts in the West End, though, meant living apart from his wife, Gillian (who first spotted him in a play in Belfast and told her friends she was going to marry him) and daughter, Caitlin, who would both fly to London at Christmas so the family could spend the day together.

This year, it will still be just the three of them on Christmas Day - at home in Belfast - and with Kearns immersing himself in all the cooking. As a former catering college graduate, the kitchen is his sanctuary and second-favourite place, after the stage.

“I went to the Abbey Grammar School in Newry but left after my O-levels to go to catering college,” he says. “I just felt totally overwhelmed at grammar school; I never felt clever enough. I did my City and Guilds and worked for a little while in hotels in Warrenpoint, but even though it wasn't the career for me, the passion for cooking never left.

“Nothing gives me more pleasure than cooking. I cook, I bake... I love having people round for dinner. I am in charge of every dinner in our house, including the food on Christmas Day. It's a very relaxed affair, just the three of us, with no rules and no timings – I love it.”

Festivities over, it's straight back to work at The Shop at the Top of the Town but the indefatigable Kearns wouldn't have it any other way. “I am one of the luckiest people in the world,” he enunciates with those still audible Shakespearian overtones, “because I actually get paid to do what I love and there aren't many people who can say that about the line of work they are in.

“This is a lovely show, influenced by some romantic old movies, the sort of movies that we all sit down and watch at Christmas - and some of us might even cry at. Yes, there is comedy, but also a couple of little ‘saddy' bits and some very tender moments. I'm all about a bit of nostalgia.”

:: 'The Shop at the Top of the Town' written by Michael Cameron (Ruby, Carson and the Lady) and directed by Colm G Doran, stars Sean Kearns, Marty Maguire, Libby Smyth and Mary Moulds, alongside newcomers Rosie Barry, Rory McCollum and David Marken. It runs at the Theatre at the Mill, Newtownabbey, until December 31. Tickets at theatreatthemill.com or by calling 0300 123 7788.