This week, Jane Hardy catches up with what's happening at the Belfast International Arts Festival as it celebrates its 60th anniversary 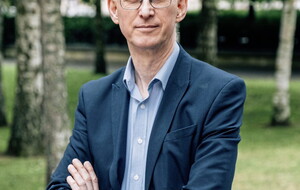 SO what do the Belfast International Arts Festival directors, performers, producers and, most importantly, audiences make of it so far?

Artistic director Richard Wakeley said: "There was a great discussion at the Belfast Exposed gallery opening of Mairéad McClean's Here, about identity and their forthcoming conference about photography and mental health".

He indicates one of the hottest tickets, a modern dance extravaganza titled The Kingdom of Shades (October 21, The MAC).

"Noé Soulier, a French choreographer who is big in the Paris Festival but who has never been to the UK, has two shows and now has agreed to a workshops so young students will have that memory. It's a bit like Darcey Bussell coming over."

This year, the Lyric Theatre's big Festival project is Propaganda, a Conor Mitchell musical set during the Berlin Blockade.

"It's about a conflicted society, really, there are a lot of metaphors flying around. I love all the fantastic songs."

It's about how we deal with wickedness, also redemption "and who's the beast", but is touching too as love conquers all.

"Unfortunately, with work in the Festival, you don't get to see other things," she adds.

Ken Fanning was in the audience for How to Fail as a Popstar. The Tumble Circus performer enjoyed it. "It was funny, moving, about what it's like to be a performer and also trans," he says. "The first Festival I ever went to I remember seeing work by DV8 which was great."

Laura Salt, French horn player and general manager of NI Opera, is of course drawn to the music part of the programme.

"I want to see pianist Michael McHale, who I was in the Belfast Youth Orchestra with and he played cello there. I think the Festival always brings together an eclectic mix." (An evening with Peter Moore, Michael McHale and Anna Huntley, October 28, the Harty Room,

Propaganda at the Lyric Theatre Belfast