Tales of the unexpected in Frank McGuinness's Dinner with Groucho

Pull up a chair and enjoy Dinner with Groucho, Frank McGuinness's play telling the story of the meeting between TS Eliot and Groucho Marx. As it opens the Belfast International Arts Fesitval, Jane Hardy speaks to actor Ian Bartholomew, who plays Groucho 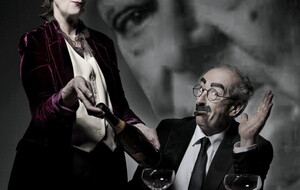 Ingrid Craigie as the Proprietor of the restaurant where TS Eliot and Groucho Marx meet, with Ian Bartholomew as Groucho

YOU imagine that when you receive a script by Frank McGuinness from your agent, you would feel pretty chuffed. As actor Ian Bartholomew (68) explains, he did. But Dinner with Groucho, in which he plays the Marx brother, reached him by a different, unusual route...

"It didn't happen like that," he tells me. "My wife Loveday Ingram is directing it and Frank wanted to hear it so I took the part of Groucho in the run through in our kitchen. He liked what I did and said he didn't want anyone else to take the role."

Having seen the play premiered during the Dublin Theatre Festival, McGuinness's instincts were spot on. Originally performed as a "labour of love" in lockdown, the fully formed show is deft, Irish, absurdly funny yet moving.

As Bartholomew says, the drama is both "poignant and funny". And totally original.

Asked what the new play from probably Ireland's foremost dramatist is about, Bartholomew gives an engaging precis.

"It's based on the real meeting of TS Eliot and Groucho Marx. They'd written letters for a long time but when they finally met, all Eliot wanted to talk about was the Marx brothers' films while Groucho, whose real name was Julius, just wanted to discuss Shakespeare," he says.

It was, in a way, like the ultimate date that ends up a bit of a disappointment. This is conveyed in the drama as the two men square up, aim for their own conversational topics, do a bit of vaudeville song and dance (it works, really) and realise their expectations are mismatched.

When I ask Bartholomew for a key line from the play, he answers: "It's when Groucho says, 'We did not get what we expected from each other.'"

Looking at Bartholomew's impressive, wide ranging CV, you can't help noticing he has successfully done time in a soap. Coronation Street, no less, in which he played the complex, dark character Geoff Metcalfe. He won three awards for his portrayal of a husband who turns out to be coercive and controlling.

"People would say to me, 'Oh, it must be fun to be the baddy'; but it wasn't as you have to enter a dark place."

As Bartholomew indicates, for the 18 months or so he acted in the popular TV show, he was involved in a "very intense storyline". He says that Metcalfe seemed a nice enough guy in public but became a different character behind closed doors.

Working on a soap is already pretty intense as the actors are based near the set and spend most days learning lines ("reams of them"), then acting them.

But the programme's producers wanted to cover the topic in a serious manner rather than as a quick slice of issue television.

Bartholomew trained at the Guildford drama school and got his Equity card when he was 22. He's English, from a small town called Gosport near Southampton, but spent his twenties in London.

"It was fun. I did quite a lot of TV and worked at the National (Theatre) with Richard Eyre, doing plays by David Hare, drama like The Government Inspector and shows like Guys and Dolls," he tells me.

He also acted alongside Rik Mayall: "He was very funny and quite a character, as you'd expect. He'd go on stage and make it up."

Bartholomew has worked in Ireland before – "I've done a couple of TV things in the south and was in Belfast 17 years ago, again in the International Festival".

Then Bartholomew had the good fortune to be acting in a play called The Half by actor Richard Dormer: "It's about an actor falling apart when he is playing Hamlet but I had a good time doing it."

We go on to discuss the importance of the arts and why in times of austerity, it's a false economy to cut back on funding.

"I don't want to get too pompous but any arts are important for the wellbeing of a society. I think communal events are vital – anything that gets people together has got to be uplifting, valuable," he says.

"And live performance is special, different from watching TV. Now you can catch up on things at any time, watch them later, but to see something live with other people is important."

He adds, sounding passionate and not pompous at all: "I became an actor to work in the theatre although I do other stuff around it."

Asked whether it's tough being directed by your wife, Bartholomew sounds surprised.

"No, when we're in rehearsal we manage to delineate our roles, although we do occasionally discuss a play after rehearsals," he says.

Music is the actor's other passion. Bartholomew plays guitar and piano and writes music. His influences are the best. "Oh, the Beatles, Jimi Hendrix, '70s and '80s stuff. Music is a constant joy."

:: Jane Hardy travelled to Dublin with Aircoach and stayed at the 4-star Maldron Hotel Tallaght.

:: Dinner with Groucho by Frank McGuinness from b*spoke theatre company opens the Belfast International Arts Festival today and runs at The MAC until October 9. themaclive.com.

Tales of the unexpected in Frank McGuinness's Dinner with Groucho