Belfast actress Maggie Cronin is one of a cast of mysterious characters set to enthral Belfast audiences this Halloween. She chats to Jenny Lee about Cahoots new immersive theatre show The Ghost House - part of the Belfast International Arts Festival - as well as working with Pierce Brosnan and the qualities needed to succeed in the acting world today 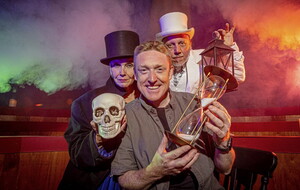 Allison Harding as Lady Helena Hope with Paul McEneaney, artistic director of Cahoots and Hugh Brown as Tristan in The Ghost House by Cahoots

ARE you brave enough to enter The Ghost House this autumn? This spooky new walk-through theatre show from Cahoots NI Theatre Company invites audiences to unearth some ghostly secrets...

This new immersive theatre experience, presented as part of Belfast International Arts Festival, is based on an original story by playwright Charles Way.

The Ghost House introduces visitors to the renowned paranormal investigator, Lady Helena Hope (Allison Harding), who will guide visitors into a shadowy world of shipwrecks and sword fights to 'the past'.

As they interact with a host of otherworldly characters on their journey, they will uncover the truth behind the legend of Black Hearted Benjamin (Harvey Schorah), the highwayman rumoured to haunt the house.

Playing 'The Lady at the Window' is Belfast actress Maggie Cronin.

"She's quite a mysterious figure, who has an association with Black Hearted Benjamin. What my character does is put a few pieces of the jigsaw together," says the experienced actress, who describes her age as "36 with an awful lot of tax".

Having previously worked with Cahoots NI and their director Paul Bosco McEneaney, it was their trademark ingenuity and wizardry which attracted Cronin to the role.

"Paul is an illusionist so the work always has an element of magic or something spectacular in it. It's always interesting to be a part of that," she explains.

And has she picked up any magic tricks herself? "There might well be some illusions around me, but they won't be my work," she laughs.

"I love Halloween, I think it's a really special time and it's lovely to be part of this theatrical spectacle. The setting is dark and atmospheric and perfect for families and friends to gather together and do something that is of the season."

After training at the Webber Douglas Academy of Dramatic Art in London, Cronin began by working on the alternative comedy circuit as a singer with the a cappella group Draylon Underground, appearing at venues such as the Comedy Store, Jongleurs and on Radio 4 and BBC2.

Since then her versatility has created a career crossing many genres, including TV, film, stage and radio.

"I always say love the one you're currently doing," she laughs. "Each of them brings a challenge, but I do love radio. I love reading a short story because it's so intimate and you are completely transported.

"During lockdown I did the Radio 4 drama Mosley Must Fall, about the politician Oswald Mosley and of course none of us could go into the studio. "We had microphones and software at home and it was so surreal working with an actor who was in London and yet when it was edited together it sounded like we were in the one room together – it was magical."

She is currently embarking upon a very different style of writing, in undertaking a PhD at Queen's University, about the lives of female theatre practitioners in the north of Ireland.

While Cronin looks back at the historical context of theatre here and the groundbreaking work done by Marie Jones, Carol Moore and the other ladies of Charabanc Theatre Company in the 1980s, she brings her research right up to the present day.

"The movement Waking the Feminists have done amazing work in the south of Ireland and have managed to change some gender equality, rules and regulations for Irish theatres," she says.

"A corresponding movement has started here. All sections of the arts here are in difficulty and a dedicated arts policy is low on people's priorities.

"But I look at what women working in theatre here are doing now and there are some amazing really small scale companies doing great work."

Her advice to young actors here is to "work hard, join your Equity union, be passionate about what you do, but don't take any crap".

Maggie Cronin, at Cityside Retail Park. where she is starring in the new Cahoots production, The Ghost House. Picture by Mal McCann.

"It's tough, because when we are playing characters we have to show vulnerability," she says.

"But as actors, you need to be robust. You don't have to be nasty - you should always be as honourable as you can be, but don't let anybody take advantage," adds Cronin, who says she speaks from experience, though won't go into specific episodes.

Many will remember Cronin from the BBC medical soap Doctors, in her role as Riverside Medical receptionist Kate McGuire.

Cronin played the role for over 600 episodes and has many fond memories. "It was a very intense time, but I made some very firm friends whom I still keep in touch with," she says.

"I think it kept my poor mother alive for a few extra years watching it."

Her acting highlight is arguably playing Mary Burns in the Academy Award winning short film The Shore, alongside Ciarán Hinds.

But, she admits that it isn't always the big roles that bring the most satisfaction: "Sometimes it may be just a small intimate play you are doing and you just know you have hit home."

She recently worked alongside the former James Bond in the Terry Loane directed movie The Last Rifleman.

Inspired by true events, Brosnan plays Artie Crawford, a Second World War veteran living in a care home in Northern Ireland who has just lost his wife. On the 75th anniversary of the D-Day landings in Normandy, Artie decides to escape his care home and embarks on an arduous but inspirational journey to France to face the ghosts of his past.

"It's such a lovely story. I was in the early shoots with Pierce. He's just the ultimate professional and just a really nice man," she adds sincerely.

:: The Ghost House runs from October 14 to 31. Tickets are on sale at Belfastinternationalartsfestival.com. All under 18s must be accompanied by an adult.

Allison Harding as Lady Helena Hope with Paul McEneaney, artistic director of Cahoots and Hugh Brown as Tristan in The Ghost House by Cahoots