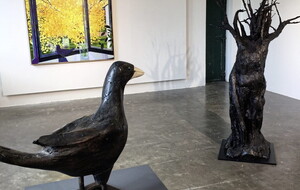 Rook by Betty McCord is the inspiration for the exhibition by mother and son artists Catherine and Simon McWilliams at the Golden Thread Gallery.

I was thrilled, and honoured actually, to bump into the great playwright Frank McGuinness at the premiere of his new play, Dinner with Groucho, in Dublin this week.

It's heading north to The MAC on October 5 as part of the Belfast International Arts Festival. Deft, European and Irish, intellectual but with bursts of cabaret, it proves you don't need an ordinary plot for superb drama.

Based on the real life encounter between poet TS Eliot and funny man Mr Marx, it illustrates the ultimate date that ends up slightly disappointing.

Yet en route, we get legendary talk, involving the third character, the female Proprietor who owns the restaurants, meditation on human existence (and extinction, topically, with her asking 'Do you remember my great auk?' which gets a laugh).

ROOT and Branch, a Golden Thread Gallery exhibition on until October 15 with talk by the artists today at 1pm, shows an artistic dynasty at work. And underlines the fact that an older creative generation may actually have the more disturbing, contemporary take on things.

Mother and son painters Catherine McWilliams and Simon McWilliams have been inspired by Betty McCord's impressive sculpture of the middle member of the crow family, Rook.

It casts its baleful eye on proceedings while Mrs McWilliams' Gaia Burning is coloured in a post-climate change fiery palette. Her son's landscapes have the rook inside domesticated houses with views of beautiful yellow and red shrubs beyond in Golden Tree and Autumn Window.

But we return to Shakespeare's view of the bird, ie sinister, in Catherine McWilliams' Nesting Rooks canvas. They collect in great numbers around the bare boughs as if directed by Alfred Hitchcock.

THE Emmy for This England, the TV film about when Boris met Covid (and of course, Carrie), should really go to the maker of Ken Branagh's fat suit.

As Johnson, he's uncanny, not just because of the prosthetics. Our greatest actor, alongside Messrs Neeson and Hinds, does a great job of recreating the Mr Toad of politics.

BIG Telly is a drama company with a genuinely left-field imagination.

They've put out a casting call for a mini-flock of cute sheep to play, well, themselves but with blue dye for their new Belfast International Arts Festival production, Frankenstein's Monster is Drunk and the Sheep Have All Jumped the Fences at the Brian Friel Theatre from October 14-22. Horror with a happy ending, apparently.