Derry-born actor Ruairi Conaghan chats to David Roy about Lies Where It Falls, a new autobiographical play which explores the lasting impact of his uncle's murder in the early years of the Troubles... 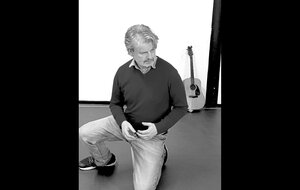 RUAIRI Conaghan was eight-years-old on September 16 1974 when his uncle and namesake, Judge Rory Conaghan, was shot dead by the IRA on his doorstep in Derry by a gunman posing as a postman. Ruairi's cousin, nine-year-old Deirdre, was holding her father's hand when the killer opened fire and threw herself on top of her father in an attempt to protect him.

No-one was ever arrested for the murder of the resident magistrate, who was one of the first Catholic judges to be targeted by the IRA during the Troubles.

"There just wasn't any DNA evidence," explains Conaghan, an actor with credits including TV hit Downton Abbey and Sonia Friedman's production of Hamlet.

"We knew that two men and a woman were involved because they were seen abandoning the car. We know it was a young man disguised as a postman, who actually fired the shot. But there was no identification."

Nearly 50 years on from the tragedy which devastated his family, Conaghan has penned Lies Where It Falls, a one-man show in which he details how the lingering trauma of his uncle's murder resurfaced and intensified in 2015 while performing alongside Benedict Cumberbatch in Hamlet at London's Barbican Theatre.

The Derry man's role as Player King involved performing a speech about the assassination of King Priam of Troy, the details of which struck a painful chord within the actor whose mental and physical health was already ailing when he took on the part of a lifetime.

"This was the job of my career," explains Conaghan, who has enlisted his friend and fellow actor Patrick O'Kane to direct the new show, which opens at Belfast's Accidental Theatre on Friday, September 30.

"It was a huge production and the Player King is a brilliant part. And suddenly it looked like I was not going to be in it any more because I had some kind of physical collapse – my body just collapsed.

"The Player King's speech relates to the murder of King Priam, one of the kings of Troy. He was an older man, murdered by a young buck Greek assassin. And it was a particularly brutal murder, witnessed by Priam's wife. She just was completely devastated by it, screaming to the gods.

"So what happened to me was, I just started to see my uncle's murder. It just crept into me and that was very difficult to manage."

He adds: "In a funny way, it actually kept me in the show, because all this truth started to appear. So even through my extraordinary ill health I was delivering this performance.

"When I left the show the damage really kicked in because your body and your mind has to readjust to what's just happened. And it was just like a car crash with me."

Lies Where It Falls tells the story of how Conaghan was forced to finally reckon with the grief and pain surrounding his uncle's death in the wake of this collapse and explores how he recovered with the help of his family and the theatre community.

Audiences will discover how another role the actor took on in 2015 just prior to his Hamlet experience also had a profound affect on his emotional journey: having vowed never to play an IRA man, the Derry performer finally made an exception to this when he played Brighton bomber Patrick Magee in The Bombing Of The Grand Hotel. The play centred on the remarkable friendship which later developed between the IRA man and Jo Berry, the daughter of Tory MP Anthony Berry who was killed in the 1984 blast.

"The reason I finally decided to play him was because he and Jo Berry pursued their own truth and reconciliation," explains Conaghan.

As the actor explains, his family circle are also fully supporting him for Lies Where It Falls, which takes its title from a line in the Shakespeare play which proved to be so revelatory for the Derry performer.

"They're very behind what I'm doing here," says Conaghan, who moved home to the north in 2020 after living in London for many years.

"Although I'm telling my story, I am telling their story too. One of the reasons why I'm well again is because of the love and care of my family. Both both my extended family and my wife and my son, they got me through it."

In the run up to staging Lies Where It Falls, Conaghan has reached out to Belfast's Wave Trauma Centre which provides advice and support for those affected by the Troubles.

"It's a facility for people that have suffered trauma," he tells me.

"They offer art courses and drama courses and they're just brilliant, really. They've been very supportive of what I've been trying to do with this show.

"I've just come back from seeing them actually, I took them up a few poster for the show and they said they'd be delighted to put them up for me."

As for what exactly people can expect from the show itself, he says: "It's a story that's about legacy, trauma, mortality and physical and mental illness – but I also was very aware that it had to be entertaining. So it has that very kind of Northern Ireland caustic humour, that gallows humour within it.

"Shakespeare played a strong part in helping me understand things, so part of this is around me being in Hamlet and how that kind of brought forward some of the trauma – but also offered me an insight into depression. Hamlet tells the story of depression pretty much better than any other piece of literature you're likely to read. And that became a kind of guide for the story that I wanted to tell.

"So this tells the story of what happened to my uncle, and how that impacted my family and then it tells a story of me, from playing Pat Magee the Brighton bomber and the difficulty I had, first of all in accepting the role and then secondly when I met him. And then what happened afterwards in terms of had I done the right thing.

"When I first started writing this two years ago, it just poured out of me. And then for the last two years, we've been refining it and making it into a play. I'm pleased with it and I'm really looking forward to getting out there to tell this story."

:: Lies Where It Falls, September 30 to October 2, Accidental Theatre, Belfast. Tickets and showtimes via accidentaltheatre.co.uk