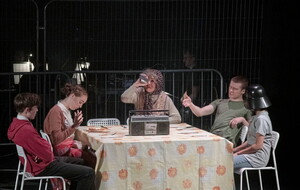 Breadboy is set in Belfast against the backdrop of the Troubles but looks towards a brighter future for teenagers. Picture by Chris Hill.

TONY Macaulay's first bestselling memoir Paperboy spawned a terrific musical with music by Duke Special and words by Andrew Doyle which had two sell-out runs in Belfast. Macaulay's equally insightful second autobiographical volume, Breadboy, has now become another slice of music theatre, premiered after a Covid delay at The Lyric Theatre, but partly because the material is more complicated, it hasn't translated so well. And the Troubles inevitably hang over proceedings, with 1977 the key year in which the narrative is set.

There were some nice moments and songs, though, in this rites of passage tale of the teenager working the Ormo bread van. None better than Elvis (Colin Bracken), who's just left the building, rising to sing from a purple lined coffin at the start. Peter Wilson aka Duke Special seemed to reference Paul McCartney in Superstar and his ballad Invisible World was moving, with a reprise in which the exuberant British Youth Music Theatre had a well choreographed sequence.

Apart from incorporating Kipling's If into the narrative, Andrew Doyle turns a mean lyric. He rhymed the teenage angst of "She doesn't know that I exist..." with "vivisectionist" and got decent mileage from Belfast idioms.

There was tragedy - Mr Oliver's death, slightly lost in the action onstage - and there was naturally comedy too as Macaulay has a gift for observational humour. The younger Tony (Judah McKee) was good at the bread-related gags. The camp dance teacher, Mr Clark (Matthew Lawson), is a stock character yet very believable with his tales of near-misses in Broadway auditions. Miss Baron (Freya McGregor) too, the teacher with the crush on him, was also convincing.

Their roles came to the fore in the show within a show. Tony's school was putting on West Side Story and he vied for the lead with his rival in romance, tall, English Tim (Sam Downey). Including so much of one of the 20th century's best musicals was a bold, risky move. There's A Place For Us streamed out and the cast's voices seemed most confident when singing about the Jets and the Sharks.

The second half of the show was definitely stronger. The older Tony (Jude Long) was engaging as he gained confidence and stood up to his rival. Negotiating relationships as well as the checkpoints in town, this was a good performance. It was matched by Juliette Pierce in the role of the friend who becomes more. There was a satisfying moment when Tony rejects Judy, the girl he's hankered after from the start and who never remembered his name.

This is a period piece with what you might call youthful equal opportunities sectarianism. There were insults involving the F-word, ie Fenian but hey, there were anti-Protestant comments too with young Thomas saying they should return to Scotland. And the show ends, as it should, with a look towards the future when teenagers won't have a troubled backdrop.

Directed by Steven Dexter and Dean Johnson with particularly creative use of the crowd barriers in the second act, Breadboy showed what life in that time and this place was like.