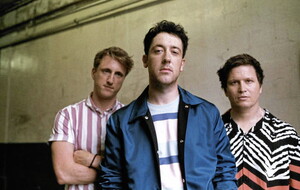 Indie rockers The Wombats are back with a new EP

MANCHESTER art rockers Sylvette unveil a more personal, intimate and experimental sound on their third album, which is imbued with grief and loss.

Opener Blanket Of Dust is so minimal that at times the loudest noise is of fingers on guitar strings as Charlie Sinclair's falsetto evokes Jeff Buckley, while the lyric “one day like this is worth a thousand sitting in an armchair reading about this” brings to mind Elbow, though with none of the stadium-filling grandeur.

Marble Stone adds strings as does the title track, the longest at nearly six minutes, moving from the quietest of starts to Sinclair singing an impassioned “I feel too young to watch my father pass away in my arms”.

Dream Diary 1, just 121 seconds, and Dream Diary 2, at 62 seconds, are the spoken-word tracks, with Sinclair addressing his disabled and terminally ill father, while his voice is distorted on the plaintive Safety In Solitude.

Single Thread is a brave and uncompromising album, true to its own vision, and suggests Sylvette's next one will fulfil the promise shown here.

A MAINSTAY of the dance music underground for years, American DJ and producer Honey Dijon has recently broken through into the mainstream thanks to her work on Beyonce's latest album.

This newfound appreciation is well overdue – her championing of house music and its roots in the LGBT community have been longstanding.

Her debut album, 2017's The Best of Both Worlds, captured the grooving, mid-tempo atmosphere of her DJ sets.

Black Girl Magic remains firmly fixed to the dance floor but expands the musical palate to include disco, vocal-driven house and Latin sounds.

This is a freewheeling affair that features a number of collaborators, from Brazilian drag queen and singer Pabllo Vittar to Chicago house legend Mike Dunn.

While not quite the crossover album some may have been expecting, Black Girl Magic manages to take Honey Dijon's underground roots and make a record that has something for everyone.

US NATIVE Addie Brik has named her latest album after a Southern phrase that describes something which fails to achieve its intended purpose.

Unfortunately, it's a fitting title, as the latest release from the Scotland-based singer-songwriter has both hits and misses.

It starts off with The First Odd Prime, which surprises with a grunge beat accompanying Brik's Kate Bush-like vocals, and her soulful delivery adds a further emotional layer to the song.

But from here on things take a dive.

Retromingent fails to grip you and Brik's wobbly vibrato doesn't help either, while her disregard for key on Don't Touch The Pitch results in a track that feels unpleasantly chaotic rather than pleasingly experimental.

Brik continues to croon her way throughout the rest of the album and the songs Gearless and Don't Touch the Pitch (reprise) help to revitalise it towards the end.

But ultimately, its an uneven affair that leaves you wanting more.

JUST 10 months after their latest album, the indie rockers are back with a new EP.

The title track was released back in summer and is classic Wombats with a catchy pop-rock guitar riff forming its core.

I Think My Mind Has Made Its Mind Up is heavier with grinding guitars and an enjoyable bridge thanks to the pairing of bass and crash cymbals.

The other tracks are all interesting and ambitious.

Dressed to Kill is sinister with distorted vocals that bear a surprising resemblance to Miley Cyrus' Malibu.

Demon's sombre bridge offers contrast to the outcry on the chorus; Same Old Damage is a diversion from the band's usual sound, giving off Twenty One Pilots vibes and unexpected falsetto on the chorus; whereas Good Idea at The Time is a fast-paced return to the band's trademark sound to nicely round off the EP.