Best known for her smash-hit Kids In America, green-fingered Kim Wilde speaks to Jenny Lee about how taking a break from music has helped her love it more now, her musical family and her upcoming gig in Belfast 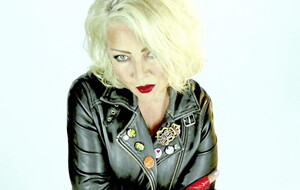 At 62 Kim Wilde is enjoying performing more than ever

She exploded on to the pop scene aged 20 with the smash hit Kids in America, and her punchy vocals set alight dancefloors and airwaves around the world.

With her trademark spiky blonde hair and thick black eyeliner, Wilde continued her dominance in the charts with songs like You Came and You Keep Me Hanging On, and even opened for Michael Jackson on his 1988 Bad world tour.

Despite platinum discs, Brit awards and selling 20 million singles, she admitted to "feeling lost" and, at the age of 36, decided to hit pause on her music career.

She threw herself into marriage and bringing up her children - Harry, now 24, and Rose (22) - but a decision to do a part-time course at a local horticultural college during her first pregnancy so she could learn to "create a family garden" soon turned into a whole new career.

The naturally green-fingered Wilde was asked to be a designer on Channel Four's Better Gardens and a year later started filming Garden Invaders for the BBC. She's written two gardening books – Gardening with Children and The First-Time Gardener and even won gold for her courtyard garden at The Chelsea Flower Show.

When a drunken social media post of her singing on a train in Christmas 2012 went viral, offers of an 80s revival tour marked the start of a renaissance.

While the first half of her career was about making videos, photoshoots and TV appearances, "being on stage and performing live" appealed to Wilde about a return to music.

And she admits Covid has made every moment of performing again than ever and even made her make some "brave" costume decisions.

"There was one point, before vaccinations, when I thought we would never get on stage again," she says.

"It was a very real possibility and for a lot of live performers it was heartbreaking. Now we are all back on stage and doing our job again, we appreciate it much more than we've ever done.

"Live music is really joyful. It means so much more now, not just the performers but to the audiences. I walked to a local rock pop festival in my village recently and was part of the crowd on the other side of the stage. The power of being together was absolutely incredible."

Wilde will be topping the bill at this weekend's 80s Classical gig at Belfast's SSE Arena. In a night of nostalgia when pop meets classical, Belfast Pops 60-piece symphony orchestra will play orchestral versions of some of the most iconic songs of the 80s, performed by the original artists.

But rather than pull on her leg warmers and shoulder pads, Wilde has "gone more glam rock". "I've had a load of costumes made for my Greatest Hits Tour and I'm looking forward to getting dressed up. I've never been much of a costume girl but I decided after Covid to push the boat out," she says.

"I'm looking forward to getting back to Belfast, it's been too long," adds Wilde, who couldn't put a date on when she was last in the city.

"It's really exciting singing with the orchestra. I had worked with an orchestra before on some of my tours over in Germany but I didn't know what to expect with 80s Classical and I was really blown away," says Wilde, who performed in a similar event in Leeds earlier this summer.

"The orchestrations of my songs were quite mind-blowing. I can't wait to do it all again."

And yes, they include Kids in America, which Wilde is enjoying performing more than ever before.

"When I stepped back from the music industry, I never thought I would perform it again. I had several years away from that song and I'm glad I did.

"In my mind my audience gave me back my song and my soul. Although it's over 40 years old, the energy and buzz it still creates is amazing. I have a different relationship with Kids now and never tire of singing it."

Joining her in turning back the clock will be Howard Jones, Johnny Hates Jazz, Carol Decker, Go West and Denise Pearson from Five Star who will perform all their hits in special arrangements never heard here before.

"I know them all really well. I toured with Howard in Germany, I sang on one of Johnny Hates Jazz's records, Turn Back the Clock, back in the 80s, and Carol Decker is a pretty close mate of mine. So it's going to be a really lovely get together with all those artists."

Wilde is also delighted to be joined on stage with her brother, Ricky Wilde, who remains a part of her band and her niece Scarlett Wilde, who sings backing vocals.

Her son, Harry Fowler, has followed in the family's musical footsteps. He is currently in America with the group Wunderhorse, who are supporting the Irish post-punk band Fontaines DC on their tour.

"Harry's a guitarist, singer and songwriter and also does his own stuff. He's a very dedicated musician and incredibly talented and his stardom is ascending I do believe," says the proud mum.

Her father, rock 'n' roll icon Marty Wilde is still performing at the age of 83, and Wilde plans on following his example.

"I may not be performing just the way I am now," she laughs. "But I don't think I'll ever stop being a musician. I look at my dad and I know what my destiny will be. I've had my time away and now I'll be involved in music to the day I pop my clogs."

She's not planning on abandoning gardening either.

"I could never choose between music and gardening," says Wilde, who strategically plans her musical tours for the autumn time when there is not so many gardening jobs to tend to.

I couldn't resist asking if she sings to her plants: "I often have music with me in the garden, but no, I talk to them. I have a pretty intimate relationship with them and reassure them or tell them if they are doing well."

Our interview was cut short by a telephone engineer arriving at her door to do some repairs.

"It's not all rock and roll," she laughs, apologising profusely.

:: Kim Wilde will perform at 80s Classical at the SSE Arena Belfast on Friday October 7. Tickets from ssearenabelfast.com.