David Roy chats to Horslips bassist and singer Barry Devlin about receiving this year's Oh Yeah Legend Award, marking the 50th anniversary of their debut album with an exhaustive box-set and what the future holds for the pioneers of Celtic rock... 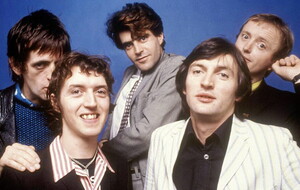 "I'M THRILLED, although it's not a thing you ever really think about – y'know, like, 'I should be a legend, lads'," says Horslips leader Barry Devlin (75) of his freshly minted Oh Yeah Legend status, which will be officially conferred upon the bassist and singer at The NI Music Prize Awards in Belfast next month.

"Of course, the others are so bitter they can't even laugh," quips the Ardboe man, referring to Jim Lockhart (keys), Johnny Fean (guitar), Charles O'Connor (fiddle/mandolin) and Eamon Carr (drums), his fellow founding members of the much loved progressive Irish rock/folk ensemble who weren't fortunate enough to be born in the north, thus rendering them ineligible for annual gong presented by Belfast's Oh Yeah Music Centre to a six-counties-bred musician of note.

"No, they're delighted. They understand it's because of the northern thing and that I'm really representing the whole band."

With a chuckle, the Co Tyrone man adds: "Now, if it had been for 'outstanding musician' or something, that might have been a different story."

Formed in Dublin in 1970, Horslips won fans far and wide with a string of classic genre-bending albums which blended rock riffs with trad melodies and instrumentation. Credited as the inventors of 'Celtic rock', the quintet sought lyrical and conceptual inspiration in Irish history and folklore.

By the time they called it quits in 1980, Horslips had documented the sounds of an ever-evolving Celtic rock crusade across an impressive 10 studio albums – including Happy to Meet - Sorry to Part (1972), The Táin (1973) and their 'holy trinity', The Book of Invasion (1976), Aliens (1977) and The Man Who Built America (1978) – plus a pair of live LPs, all of which are included in a forthcoming career-spanning boxset, the 35-disc More Than You Can Chew that's due out in December to mark the 50th anniversary of their debut LP.

The Dublin-based group bowed out without pomp or ceremony with an impassioned final performance at Belfast's Ulster Hall in October of that year, a venue they had played many times through those Troubles-blighted years and which again hosted the reformed Horslips almost a quarter of a century later in 2014.

The band's second chapter began with a 'one-off' acoustic performance at the opening of an exhibition of Horslips memorabilia in Derry, curated by superfans Jim Nelis, Stephen Ferris and Paul Callaghan. That five song cameo led to a brilliant new album of old favourites performed acoustically, Rollback, and eventually to huge gigs at Dublin's O2 arena and Belfast's Odyssey Arena in 2009, followed by sporadic live appearances each year thereafter.

"It sounds kind of cheesy, but the facts bear it out – we always loved Belfast," explains Devlin of the group's connection to the north and Belfast in particular.

"We'd play the Whitla and The Ulster Hall turnabout and when we'd play the Astoria in Bundoran in the summer it was always full of northern kids," he recalls.

These days, only Devlin and Lockhart are still performing under the Horslips name: "Jim is my best friend from forever, it's been 50 years and counting," says the bassist of this enduring partnership.

With O'Connor and Carr long retired from live work, in recent years the advisory monicker of 'Johnny, Barry & Jim of Horslips' was adopted for their concerts, including the celebratory HorslipsCon 2019 in Belfast – one of the last shows the band got to do prior to the Covid shutdown.

However, with Mr Fean having recently made the decision to hang up his guitar, Dublin musician Fiach Moriarty will be on six-string duty at the Ulster Hall on November 16 alongside Devlin, Lockhart and drummer Ray 'brother of Johnny' Fean to perform a short set once the Oh Yeah Legend Award has been presented.

"Covid kind of finished the band, in many ways. We had six gigs lined up for St Patrick's weekend in 2020 and they were all cancelled. They were always being rescheduled to the point where Johnny basically had a whole year to consider what was still an uncertain future anyway. Eventually, he just said to us, 'Look guys, with regret, I'm not coming back.'

"But we had two or three gigs that we still really wanted to do, including Paul Muldoon's Picnic [in New York] and a festival in Greece, which we did with Fiach Moriarty. He's a lovely geezer who Jim had worked with before along with Fiachna Ó Braonáin from Hothouse Flowers on an RTE show called Jingle Jangle.

"Jim and Fiach got on so well, and he's a great guitar player too, so he stepped in with Johnny's blessing."

However, it's unclear at this point how much more the quartet will perform under the Horslips name, as Devlin explains.

"Fiach's been a great buddy to tour with, but we were really just fulfilling those dates. When Charles left, we really missed the fiddle so much. But we were still able to play a lot of the core material – Sword of Light, Trouble and Dearg Doom.

"With Johnny now out as well, we're thinking 'OK, the core of the band is kind of gone'. We really don't want to do a Horslips mark four – I think that's over. We're kind of retired."

Hopefully, Devlin and Lockhart will continue to keep the band's music alive in some shape or form. Indeed, when asked what's planned for their performance at The Ulster Hall to mark the bassist's new Oh Yeah Legend status, it seems they will be dusting off a handful of old favourites for the occasion

"I think we've only got time for five songs, so they'll really select themselves," says the man of the hour.

As for the aforementioned boxset, which is being released by Mad Fish Records and has been curated by journalist/fan Colin Harper, Devlin seems equal parts embarrassed and delighted to be the subject of such a lovingly curated and lavishly presented career retrospective, which includes plenty of rare and unreleased material from the vaults.

"We would never have had the sense of wretched excess and the hubris to put out a 35-disc set," marvels the Co Tyrone musician.

"But, if you're a real fan, I don't think you'll be disappointed. There are about five really good unreleased live albums, plus the two really interesting albums of stuff that didn't make it on to the records.

"We found some really good rehearsal tapes: I was hearing [unreleased] songs and thinking 'why didn't we put that on the album?'. There's one track which was rapidly turning into an Irish Hotel California through three different rehearsals, but then we just dropped it for some reason.

After Horslips split in 1980, Devlin pursued a successful career as screenwriter and music video director, most famously for U2. In fact, he spotted Bono and Co's potential while helping them to record their earliest demos, and knew they were destined for bigger things.

"They were the hardest working men in showbiz," he tells me.

"We'd play a good gig and then we'd go out and really enjoy ourselves: they'd play a good gig and then they'd listen back to figure out what was wrong with it. And clearly it transpires that if you want to be the biggest band of all time, that's how you do it. You know, it's like Pep Guardiola says ­­– you have to be better at everything than everyone else, all of the time."

This U2 association also worked out well for the Horslips' road crew, some of whom also went on to help the Dublin trio on their ascent to global megastardom.

"Famously, our crew all did much better than we did," chuckles Devlin.

"A lot of them came back to do our Odyssey show in 2009. Steve Iredale [their former front of house engineer] came back from U2 and [former soundman] Robbie McGrath came back from the Stones.

"It was funny, at rehearsal there were a bunch of big black Range Rovers parked outside: that was the crew, whereas the band were all in rusty red Fiat 850s with one blue door."

However, looking back on 50 years of music, the Horslips man is happy enough with what he and his friends achieved during their decade-long run.

"Not everyone is built to or has the desire to work that hard," he says.

"I mean, to be honest, I was quite happy to be beached a bit lower up Mount Ararat than U2. I was a lazy git, really."

Well, now he's a Legend too.

:: NI Music Prize Awards, November 16, The Ulster Hall, Belfast. Tickets via nimusicprize.com. More Than You Can Chew will be released on December 9, pre-order now at celticnote.com/merch/horslipsboxset