Karen Martin, one half of award-winning Johnny Cash tribute act, Cash Returns, can't wait to perform at the 10th EastSide Arts Festival tomorrow. Here, she tells Gail Bell why she is constantly inspired by her alter-ego, June Carter 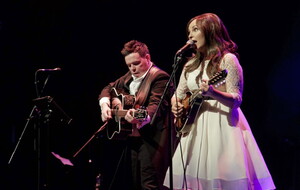 SHE has given herself a fat lip with the microphone and been stung in the armpit by a bee while on stage, but when channelling her alter-ego, June Carter, the show must always go on for Karen Martin.

The blonde Co Down mum-of-two is smoothing down her dark wig and fluffing out her vintage dresses for her next outing as the talented wife, soulmate and duet partner of country music’s great Johnny Cash, as part of the EastSide Arts Festival tomorrow.

One half of the award-winning Cash Returns show, Karen sings with JP Mac ('The Man in Black') – the pair having been hailed as ‘Best Tribute Band’ at the Hot Country TV Awards and recently picking up a ‘Best Tribute Show’ award at the Northern Ireland Country Music Awards for the second year running.

The band plays to sell-out audiences all over the Britain, Ireland and, more recently, Europe, thrilling fans with Cash classics such as Folsom Prison Blues, Walk the Line, Ring of Fire and Jackson, but also with new songs such as Hotel Yorba and The Highway Man Blues, both of which made the Top 10 in the Irish Country charts.

For Karen, bringing the show home to east Belfast for the first time in this, the 10th anniversary of the EastSide Arts festival, will be extra special, having grown up in the area and still feeling the nostalgic pull of familiarity and sense of place.

“I grew up in east Belfast and spent much of my childhood listening to country music with my mum and dad, so I really can’t wait to play in C.S. Lewis Square,” says the singer who had just returned from a hectic weekend singing in three different festivals in the Republic before packing again for a family holiday in Spain.

“It’s busy all the time now, which is great,” enthuses the just-turned 40-year-old who gave up her ‘day’ job working as an accounts manager for a mortgage company to look after her daughters and concentrate on singing full-time.

She joined the Cash Returns band in 2017 after spending several years at home caring for her youngest daughter, Hannah (8) who was born with severe congenital heart disease and diagnosed with DILV - ‘Double inlet left ventricle with transpose arteries’.

“Basically, it means she has only half a working heart,” says Karen, who lives in the village of Lisbane outside Comber. “We are all born with four pumping chambers, but Hannah only developed one-and-a-half. She was being tube-fed and on constant medication.

“I stopped gigging for several years as Hannah needed a lot of care and being with her was my number one priority. Also, with Northern Ireland no longer carrying out children’s heart surgery, there was a lot of travelling back and forwards to Birmingham, for operations.

“She has had three open heart surgeries, so far, and thankfully, is doing really well now. Her last surgery was in 2017 – she’s still on medication every day, but she’s fantastic, really. Hannah and her older sister, Laurie, who’s 12, both love singing too and they really love the Johnny Cash songs in particular. They often sing along and sometimes join us on stage at some of the shows.”

Singing is something of a family affair for the Martins, with Karen’s husband, Robin, also a performer - with wedding band The Big Kahuna.

“Robin and I met through music, when I joined his band as a singer, so he was a bit put out when I left to be June Carter,” she jests. “I joined Cash Returns in 2017, but Robin actually had an unwitting hand in it, as his agent had been contacted by JP who was looking for a country singer for the Cash Returns band at the time.

“Robin’s agent said, ‘Oh, I know the perfect girl...’ so he gave him my number. I went for an audition and it just went from there. I felt totally comfortable singing as June Carter from the start as I always loved Johnny and June and already knew their story well.

“But, it was only when I joined the band that I realised just how talented she really was. June was a comedian, dancer and actress as well as a singer and musician and she played the autoharp, the guitar, harmonica and banjo. She was incredible.”

With a small frame and huge voice, fans and critics alike have been heaping praise on Karen’s own incredible act, impersonating the American artist who was Johnny Cash’s second wife and mother to his son, Johnny Carter Cash.

And, thanks to her background training in performing arts at Castlereagh College in east Belfast, she has also taken easily to spontaneously firing off entertaining one-liners during performances with JP on stage.

“My favourite Johnny and June number would be Jackson because I love the banter, the arguments that go on between the two of them,” she says. “It’s playful and I love that vibe. I just get up there and be myself and the personalities meld well because I’m a bit of a cheeky character as well.

“The majority of it all is non-scripted, so you kind of never know what JP is going to come up with or what I’m going to say in response. It’s how Johnny and June got on together on stage and it’s a lot of fun. It keeps me on my toes.”

Adding a mandolin to the act has also proved a winning move, keeping the show fresh and bringing something new – the mandolin not being among June Carter’s stage instruments.

“One day my friend said she had a mandolin lying in her attic – a brand new, gorgeous Fender mandolin - that had belonged to her late father, so she gave it me and I taught myself how to play it,” says Karen, who also plays guitar.

“The sound of the mandolin really works well with the distinctive Johnny and June sound, so we added it into the act.

“We have changed the set-up once or twice since I have been in the band because a lot of people come out to see us again and again and you want to make sure it is a new show and there is something fresh for everyone.”

For all her perfectionism and attention to detail in bringing the iconic June Carter authentically to stage, Karen is not sure if similarities stretch to her own occasional, random acts of clumsiness.

“I try my best to make June ‘real’, but I don’t think she would ever have accidentally hit herself in the mouth with the microphone,” she laughs. “I am clumsy and hit myself in the face all the time when in the throes of a big song.

“Then, another time, I saw something out of the corner of my approaching me and flicked it away. I saw this bee landing and a second later felt the sting – right under my arm – but I told myself, ‘Carry on, carry on’... the show had to go on.”