Serge Pizzorno tells Alex Green about stepping into the role of frontman, finding peace in music and supporting Liam Gallagher at Knebworth... 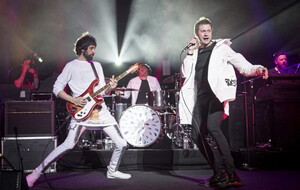 THE latest album from Kasabian is about a fork in the road. This is a fitting motif for a band who have faced difficult choices in recent years and not only survived but thrived.

The Alchemist’s Euphoria is the Leicester group’s first record since they sacked singer Tom Meighan for assaulting his partner, prompting chief songwriter and guitarist Serge Pizzorno to step up as frontman.

Some questioned whether they would continue. But the band are back, with a new sound to boot.

“Images are always very powerful to me,” Pizzorno reflects from his home in Leicester on a sweltering summer afternoon.

“I liked this idea of this character, the alchemist. In terms of setting the album as a piece, I wanted the sentiment to be about a fork in the road – the decision you make.

“We all get there. There’s a point in everyone’s life, a big moment. In the alchemist’s case, he’s on the sea and the waves are crashing into his little boat.”

The Alchemist’s Euphoria begins with the sound of waves lapping against the shoreline and Pizzorno (41), poses the question: would you stay safe on the land or get in the boat and sail off into choppy waters?

The band chose the latter.

“Do I go and risk it all and see what’s out there? Or do I stay safe in the harbour? Do I jump out of the plane? I’m sat there with my parachute. Do I go or do I stay?

“It’s about that journey. It’s about those decisions and how we get there and what it feels like to get in the boat. We get 4,000 weeks on Earth. What are we waiting for? Now is the time. That was the idea of the record.”

Pizzorno is in part referencing the band’s decision to dismiss Meighan in 2020. And although that moment changed the group, Pizzorno does not want it to define them.

“I wanted it to be broader than that,” he says.

“I didn’t want the album to be about that because that’s not that interesting. I figured that what we were going through would relate to everyone. Because we all have that moment.

“Everybody has that. At some point something comes in and it’s like, ‘What do we do at that point?’ There are those big decisions. You have got to give it a go. There’s no way you would ever forgive yourself if you didn’t.”

Since forming 25 years ago, Kasabian have traversed indie, Americana, space rock and more, amping each genre up to its most maximalist point and scoring five number one albums in the process.

Their new album looks to dance music for inspiration, the twisted hip hop of DJ Shadow and experimental ambiance of Boards of Canada.

“Electronic music has always been as important as guitar music,” he explains. “There are probably only two or three songs on the record where I’ve just played an acoustic (guitar) and traditionally wrote a song.

“Eighty percent of our records are made with beats or electronic loops. The music is birthed from that.

Kasabian have been referred to as the raver’s rock band, such is their love of sounds usually reserved for house and techno music.

Pizzorno explains that he sometimes finds purely electronic music lacks the soul needed to engage an audience. Alternatively, the traditional band set-up can lack the raw intensity he craves. Kasabian have always aspired to find somewhere in between.

“If we can get into the euphoria and the energy and the bass and that low end that hip hop and trap and rave gets, but then hit it with the emotion and the human element of the band,” he begins. “Then it’s exciting – there is something unique about that that you can’t get anywhere else.”

Stepping into the role of frontman has looked effortless for Pizzorno, although he says otherwise. He has largely given up the guitar, instead choosing to roam the stage clutching a microphone.

“It’s Iggy Pop, Alan Vega – it’s the show,” he enthuses, when asked what has inspired his new on-stage persona. “Especially because our music is huge and the audiences are huge. The performance has to match that. It has to or it’s not going to work.”

Pizzorno had a taste of the frontman life in 2019 through his SLP side project. He enlisted the help of acts such as Little Simz and Slowthai to work on the freewheeling record, which offered an escape from the pressure of being in Kasabian.

But those live shows were more theatrical, and Pizzorno was able to obscure himself with visual effects. Fronting Kasabian, he has nowhere to hide.

“Stepping in as the frontman was a massive, massive decision,” he admits. “The idea of getting someone else to sing… The one thing I have got is they are my words and my tunes.

“When I’m on that stage I am tapping into that feeling, that moment, and you are getting exactly what I’m trying to tell you about this music.

“That’s interesting and that’s what people love about going to see a show. I get up there and I give it all I have got. I never saw myself doing this but it’s just one of those things.

“Make sure the parachute is packed and then once you have jumped out of the plane there is no choice. Once you stand up on stage there is no hiding. I can’t go, ‘I’m not sure about this’.

“I’m quite introverted. I’m quite a shy person. But once you stand in the middle of that stage and there’s that many people there, you have no choice. And that is an exciting place to be.”

Pizzorno even fronted the band when they supported Liam Gallagher during his recent run of Knebworth shows – the spiritual successors to Oasis’ historic concerts there in 1996.

“They were absolutely phenomenal. As a band, just to be in front of that many people, because for a time we were thinking that would never ever happen again.

“To be a part of that and to see a gathering of that size again… It was so beautiful. It had so much more meaning than anything else.”

Importantly, Kasabian’s audience appears more than happy to come on this new journey with them – a new sound, new frontman and new songs.

“It’s been absolutely insane,” says Pizzorno. “The support and the level of energy being thrown back at us is as big if not bigger than it’s ever been. And I put it down to a new generation of fans.”

:: The Alchemist’s Euphoria is released on August 12, Kasabian play The Telegraph Building in Belfast on Thursday October 20, tickets via Ticketmaster.co.uk