Fast & Furious 9 out of this world Michelle Rodriguez as Letty holds on tight in Fast & Furious 9

The script co-written by director F Gary Gray and Daniel Casey quickly disables the handbrake on plausibility and makes no effort to slalom around gaping p(l)otholes, introducing giant electromagnets for one elaborate set piece that reduces Edinburgh city centre to rubble.

In one case, a protagonist presumed dead in an automotive fireball at the conclusion of Fast & Furious 6 is resurrected via flashback manipulation.

Once it becomes clear that the racers can survive anything, and know it, Fast & Furious 9 jettisons dramatic tension from its exhaust pipe and screeches through a series of bombastic smash 'n' grabs that venture to the only place untouched thus far: outer space. 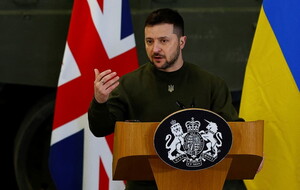