Co Down author and screenwriter Colin Bateman chats to David Roy about his new book Thunder and Lightning: A Memoir of Life on the Tough Cul-De-Sacs of Bangor, in which the Bangor man shares a warts-and-all account of his early years... 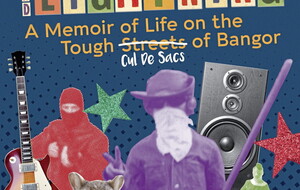 Thunder and Lightning details the author's early life in his hometown

IT'S publication day for Colin Bateman's new autobiography, Thunder and Lightning: A Memoir of Life on the Tough Cul-De-Sacs of Bangor, and the best-selling Co Down author's recollection of his formative years in the seaside town is already causing controversy.

"I left my brother's copy with him at nine o'clock this morning," explains Bateman (60) via Zoom, from his home office in Bangor.

"He hasn't read any of it, so I'm nervously awaiting his reaction to it. He texted me earlier: 'Enjoying book. Laugh-out-loud moments, but you did see George Best play', and then he's sent me a clip on YouTube of George Best playing for Northern Ireland – a game I was definitely at."

Indeed, the Divorcing Jack author has long been well aware that there are usually at least two sides to every story. It's something he learned as a straight-out-of-school news reporter for the weekly County Down Spectator during the 1980s, covering everything from community meetings and court appearances to concerts, football matches (he admits to occasionally just fabricating these reports for amusement) and sporadic, often horrific, Troubles-related incidents.

It was also very much a factor in the writing process for the screenplay which became 2016 movie The Journey – a fictionalised account of the first one-on-one meeting between DUP leader Ian Paisley and Sinn Féin peace process negotiator Martin McGuinness.

"Before we started filming, we went up to see Martin McGuinness at Sinn Féin HQ," recalls Bateman.

"We just wanted to be polite and say, 'Look, we're making this movie'. I'd written my imagined version of this historic moment, but I was dying to hear from him what actually happened. And he told me: 'Nothing happened. I just said 'Hello'.'

"But the next day, we went and met Ian Paisley Jnr. And he said, 'Aw, they got on like a house on fire. They were telling jokes and they were really funny'.

"So it was two completely different sides of the same story. So, while I've got my brother there to point out the mistakes I've made in the memoir, it's still my memory."

Indeed, one of Thunder and Lightning's occasional footnotes reveals yet another querying of events by his elder sibling. Bateman acknowledges the difference of opinion and then simply advises him: "Write your own f****** memoir".

Apparently, the author wasn't particularly worried about disclosing the intimate details of his early years. He writes with hindsight-informed amusement of playing at being a loyalist paramilitary with the other kids in his neighbourhood as a Twelfth of July-loving pre-teen who didn't meet a Catholic until he was 11-years-old, gamely revisits his awkward adolescence as a shy and lonely teenage punk rocker, recounts various amusingly bungled career opportunities in squirm-inducing detail and writes movingly about the death of his mum and dad, while also sharing his often brutally frank opinions on all manner of subjects.

"It was hard enough to write about some of those things," explains Bateman of sharing his family's history.

"But people's lives just pass by. A couple of people remember certain stories about them and then they're gone. So I like the idea of putting something down that's going to be permanent, that gives you a snapshot of what somebody's life was like."

Clearly, despite making his name as fiction writer with the Dan Starkey novels (Divorcing Jack et al), his Mystery Man series and a number of young adult titles such as Titanic 2020, the Co Down author has retained some journalistic instincts.

As for the re-telling of some of his more memorable clashes – notably a savage concert review of a local young dance troupe which results in parents laying siege to the County Down Spectator offices, a headline-grabbing exposé of teenage drinking (which Bateman was perfectly placed to provide personal testimony on) that earned him a savage beating, and a tongue-in-cheek reference to running guns for the local Boys Brigade slipped into a travel feature which said organisation and their lawyers did not see the funny side of – the author is happy enough to put all of it on the record.

"Well, you know, we'll wait and see whether I have to move out of Bangor or not," he chuckles.

The author has made a sideways move into writing for TV, film and theatre in recent years, with projects including The Journey, his 2018 DeLorean-inspired feature Driven, Irish language TV series Scúp and acclaimed stage productions such as Bag For Life and Nutcase.

"The great thing is that you can work on six or seven different projects at once, whereas a book tends to be all encompassing," he explains.

Thunder and Lightning is Bateman's first book since 2016's journalism-themed novel Paper Cuts. Appropriately, given his close and (for the moment, at least) ongoing association with the town which shaped him, the seeds of the new memoir were sown in 2019 through the tenX9 literary event organised by his friends at Bangor's Open House Festival.

"They ask nine writers to speak for 10 minutes on something factual," he explains.

"Initially, I said 'No'. But then I thought about it and wrote a 10-minute piece which sort of turned out to be the first third of the opening chapter. I read it for 200 or 300 people and it went down really well.

"So that sort of stuck with me – but I'd no intention of writing a full book."

However, he soon changed his mind when the Covid pandemic hit in 2020.

"TV work just dried up, because nothing was being developed," Bateman recalls.

"So I went back to it with the idea of, 'Well, maybe I'll just finish off that first chapter'. I didn't think I'd be able to remember things, but it's just funny – one thing leads to another and suddenly you're off and running. And then I couldn't stop, really.

"It was written pretty quickly, like all my books are."

Or rather, were: as mentioned, it's been a while since a new Bateman book has hit our bookshelves – and almost 30 years since we first met Dan Starkey, his rough-around-the-edges reporter and, later, rough-all-over private eye, in his Betty Trask Award-winning debut novel Divorcing Jack.

Starkey's last misadventure was in Dead Pass way back in 2014, but the author recently resurrected his anti-hero for a brand new novel which, having failed to attract the interest of publishers, he decided to preview on Facebook during the 2020 lockdowns – to much excitement among fans.

"It was just sitting there," Bateman explains.

"During lockdown, I just thought, 'What the hell, let's put a chapter a day up' – and it seemed to go down very well. So hopefully I'm about to sign a deal to publish that and the novel I wrote after it, White Widow."

The new memoir ends with the author coming up with the idea for his acclaimed 1995 debut novel while in the bath – something Bateman's famous friend Liam Neeson picked up on for the glowing quote he provided for the book, which he also read while having a soak.

"I couldn't put it down, even as my bath got colder," coos the Ballymena-born star, whom the Bangor author first met at the actor's New York apartment when he was in the frame to play Ian Paisley in The Journey (the role eventually taken by Tim Spall).

"I'd just watched Taken 3 on the plane over," recalls Bateman, "so I was expecting to meet this action hero – but I walked in and thought, 'Oh my god, he's dying'. He'd lost a huge amount of weight and looked absolutely awful.

"It turned out that he was actually starving himself to play a 17th century monk in Martin Scorsese's Silence. The casting [for The Journey] didn't work out in the end, but he was really nice.

"I was just another writer to him at that point, but his partner at the time was also from Northern Ireland. She was a fan of my books and, apparently, after I left she sort of said to him, 'Do you know who that was?', which is hilarious.

"So he later tracked me down by email to say that he'd started reading all the books. We've kept in touch over the years since – and he really did give me a lovely quote for the book."

:: Thunder and Lightning is out now, published by Merrion Press. Colin Bateman will launch the book at The Court House in Bangor on October 29, tickets available via courthousebangor.com.