The inspirational Bernice Burrows is one of the poets featured in Words Out, an anthology of poetry, prose and pictures from Open Arts, which works with disabled people. She talks to Jane Hardy about crafting poems from pictures and how writing keeps her going. 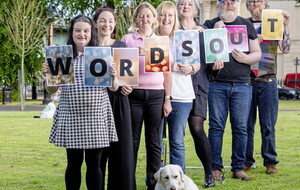 Some of the contributors to Words Out, an anthology from Open Arts, which supports the creativity of disabled people.

HOW does poetry work? It's often a question of music and rhythm - that is, sound. TS Eliot even suggested you could understand a well written poem in a language you didn't speak because of the verbal impact.

Bernice Burrows (45), one of the budding poets and artists included in the new anthology Words Out published by Open Arts, is deaf. She says when we meet in an upper room in The Crescent Arts Centre that her poems often begin with a picture.

"I am more a photographic person, I have a picture in mind," she says. Adept at producing word pictures, her attractive poem Starlings opens with her identifying with a murmuration seen one evening.

It begins: "At dusk and dawn/Starlings take flight/My heart beats faster/As I draw invisible wings/Joining in imaginatively on their flight..."

Burrows says that this poem started when she spotted starlings and enjoyed seeing them fly under the Albert Bridge in Belfast.

She initially grew up in north Belfast but Bernice moved on. She says now: "I was fostered in Glengormley, back in east Belfast, then moved to Killyleagh. I like being in the city but just miss Killyleagh Castle."

Writing was always an interest. Burrows entered some short story competitions in her youth: "I won a couple and remember writing about this little boy who lost his mum then went to work on a farm."

At five, Burrows got her first hearing aid. She remarks now: "The only thing I can say is (it's) forever lost, forever broken."

Yet Burrows found a way through, partly through other people's books. Like many people who write, she also relishes reading: "I like Margaret Atwood and when I was at a friend's house, he had to take the book out of my hand and say, 'Let's go for dinner'."

Learning about her life, the right adjective is probably 'eventful'.

She has been homeless, she has started a postgraduate qualification and she also found love in a hotel bar.

Bernice reveals that she met Andrii when looking for a table to sit at in the hotel across from her hostel: "I'd gone with a friend after looking for a house and wondered was he deaf as he seemed to be signing. No, but we just clicked. And exchanged numbers..."

It turned out that Andrii was from Ukraine. Sadly he became ill, and died peacefully last November "after a short battle with cancer that he fought bravely", says Burrows.

When Russia invaded Ukraine in February, Burrows says she didn't fixate on coverage of the war in her late husband's homeland. "In a way, it's good that he's not here to watch all that. He loved his country and it's not a nice thing," she says.

Burrows had written a poem about her feelings for Andrii which has become a kind of memorial in the anthology. "It was written before he died and it was pretty cathartic afterwards. To have something in print for his memory and that other people can see. It's there, it is special. Something can be addressed in writing that you can't in conversation."

Burrows's beautiful haiku on her husband, which she writes in my notebook, runs like this:

Trying to learn our English

The sense of affection, and the difficulties of all immigrants adjusting to a new language and culture, is right there.

Launching the anthology earlier in the year was apparently "great fun". Burrows had taken a year out to spend time with her ailing husband, and is now studying for a Master's at Queen's. "I also wanted to set myself up as a writer," she says.

She has a range of subjects, from relationships ("for example, about the friendship between two girls, one in a nice house with her family, one in social housing, and she likes the first girl's brother.") and even pets.

Burrows maintains that you can raise awareness via poetry. "Writing about homelessness and disability might not be to the forefront, but it can get the message across."

She has been attending a weekly writing group at the Crescent Arts Centre: "During lockdown, we had some sessions with a couple of people participating at home on 52-inch TVs. I write my poems on paper first, then change to the laptop. And I discovered I like haikus."

In the mix of creativity, there is loss, positivity and life. But writing was key for Bernice Burrows: "When I was in the hostel, Open Arts and the writing classes kept me going."

:: The Words Out anthology is available for free in Belfast from the Crescent Arts Centre on University Road, the University of Atypical on Royal Avenue and the Linen Hall Library. Openartsni.org