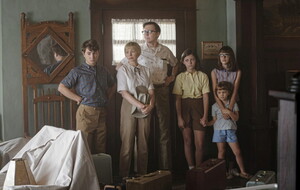 IN HIS most unabashedly personal film, Oscar-winning director Steven Spielberg continues to venerate the power of the family unit to overcome adversity while reflecting on his wonder years in 1950s New Jersey and Arizona.

The first flushes of his love affair with cinema are traced back to January 10 1952, when Spielberg's six-year-old alter ego, Sammy Fabelman (Mateo Zoryan Francis-DeFord), stands nervously in front of his first cinema marquee – Cecil B DeMille's The Greatest Show On Earth – with parents Burt (Paul Dano) and Mitzi (Michelle Williams).

The bespectacled, electrical engineer father unintentionally deepens young Sammy's trepidation and fear by spouting technical jargon about persistence of vision, the trick of the mind that creates the illusion of moving pictures when 24 photographs are projected on to a screen every second.

His concert pianist mother, an undimmable force of nature, salvages the defining moment.

"Movies are dreams that you never forget," she coos soothingly.

Spielberg never forgets his dreams in The Fabelmans, weaving narrative threads between personal recollections and his subsequent works of big screen fiction including Close Encounters Of The Third Kind, E.T. The Extra-Terrestrial and Saving Private Ryan.

Inspired by the train crash sequence in The Greatest Show On Earth, teenage Sammy (Gabriel LaBelle) answers his creative calling with a film camera gifted by his parents and words of wisdom from his granduncle Boris (Judd Hirsch).

"We are junkies and art is our drug," he enthusiastically counsels the boy.

The fallout serves as a painful first lesson about the enduring power of cinema.

When Sammy tries to apologise, insisting that he never intended to hurt anyone, Mitzi again delivers perfect words of comfort: "Guilt is a wasted emotion."

The Fabelmans is a bittersweet portrait of a post-war family in crisis, anchored by a mesmerising performance from Williams as an emotionally brittle free spirit who won't allow her children to relinquish their dreams.

Key motifs from Spielberg's impressive back catalogue proliferate, often laced with gentle humour like when young Sammy gets a crash course in camera placement from director John Ford (David Lynch).

Persistence of vision isn't required to see the sincerity that twinkles in every lovingly crafted frame.