Jenny Lee puts performers and artists on the spot about what really matters to them. This week, Belfast writer and Maggie Muff creator Leesa Harker 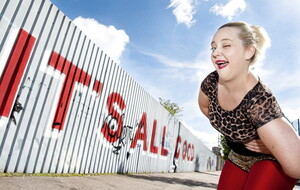 1. When did you think about a career in writing/theatre and what were your first steps into it?

I've always wanted to be a writer since I was a young child. I loved books and reading. I was a regular at my local library and I used to check out Stephen King books when I was 11/12 and pretend they were for my mum.

I seriously thought about writing when I was 32. I had started writing a novel and had sent out the first three chapters to literary agents in London when I started writing about Maggie Muff on Facebook – just for my own entertainment.

Once those stories got some traction, I was approached by Blackstaff Press and offered a book deal.

Take That The Circus tour in Croke Park, 2009. The production was out of this world. And The Script supported them, which made it even better.

Hellraiser at Belfast's Ulster Hall, about 1993. One for the '90s ravers. Carl Cox was playing when a bomb scare was announced and everyone had to pile out onto the street until the police and army bomb squad made sure the place was safe. Someone blasted music from a car stereo and the whole street was dancing. Then we all went back in to The Ulster Hall and continued our night like nothing happened. That memory will stay with me forever.

It would have to be Queen – just for their range of music that suits all ages.

Linger by The Cranberries because the instrumental at the beginning of the song makes my heart soar.

I'd take Return of the Divine Sophia by Tricia McCannon. It's a book about religion and in particular, women's place in religion. It's a big book – it took me almost a year to read it, so I know it could keep me occupied and thinking for a very long time.

Bridesmaids, It's a Wonderful Life and Dirty Dancing. The music, the romance, Patrick Swayze's snake hips – what's not to love?

Fifty Shades of Grey. Gratuitous nudity and gaudy. It's not supposed to be a comedy but people in the cinema were laughing.

Marian Keyes. Love her books. She is the person that made me want to be a writer.

C J Tudor, a relatively new author with a horror style akin to Stephen King. One of her latest books is being made into the TV series, The Burning Girls.

And Angela Carter ­– I have all her novels and I read them regularly. The Bloody Chamber is my favourite.

My daughters both play football for Ballyclare Comrades Ladies so I would watch them train and play matches weekly.

Eagle beach in Aruba – white powder-soft sand and sea every shade of blue. I love the Caribbean – especially a beach with very few people on it. Bliss.

Drink? A nice crisp Pinot Grigio or a Mojito.

I have a few but probably my friend Jennifer. I've known her since I was eight years old. She lived a few doors up from me when we were kids.

I've been on quite a spiritual journey in the last three years. I've read a lot of books on the subject. Truth is, I can't answer that. No one knows for sure. I admire people who have blind faith – I don't. I believe in something, but as for organised religion – it's a 'no' from me. Every one of them is dripping in oppression and patriarchal systems.

:: The last ever showing of Maggie – Yer Ma runs from January 25 to February 12 at The MAC theatre in Belfast. Tickets via Themaclive.com. Leesa is currently writing on the popular BBC drama Hope Street and has written and produced the short film The Bully, which will be shown at film festivals throughout 2023.