A new book by former RTÉ journalist Valerie Cox finds famous Irish grandparents, including former Taoiseach Bernie Ahern and Belfast actor Ian McElhinney, sharing memories of bygone times and offering advice to future generations. Jenny Lee chats to the author about When I Was Your Age... 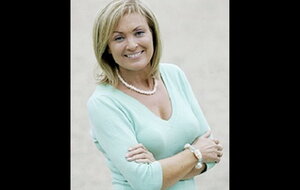 These words from broadcaster Mary Kennedy are just some of the pearls of wisdom shared with future generations in a delightful book celebrating the special bond between grandparents and their grandchildren.

In When I Was Your Age, former RTÉ journalist and chronicler of times past Valerie Cox creates a snapshot of social history and an unforgettable trip down memory lane.

The Co Wicklow-based 71-year-old has four grandchildren, Brian, Henry, Ellie and Michael, ranging in age from six to 11.

"The birth of a new generation in our family opened up a well of memories from my younger life, as I thought about how times had changed, and what that might mean in the lives of my grandchildren," she says.

"So many things about life today for children are better: education, career opportunities, acceptance of difference and societal tolerance in general.

"But perhaps other things have been lost. Choices were fewer, as were life expectations. Children now have a much wider range of influence in their lives, partly through technology and social media, and perhaps there is something to be gained from recognising the value of a time when the life of a child was more contained, its pleasures less dependent on material things."

Full of tender and surprising reminiscences from across Ireland, along with revelations on what truly matters in life, When I Was Your Age features contributions from a wide spectrum of society.

"Every single one of them brought up the fact that their childhood was simpler. They do see life moves on, but they want a balance and for their grandchildren to see there is something beyond modern technology," observes Cox.

Former Taoiseach Bertie Ahern recalls an idyllic childhood of making hideouts and climbing trees in Valerie Cox's book When I Was Your Age. Picture by Justin Farrelly/PA Wire.

"Bertie Ahern took this to the extreme because he rented a couple of allotments in north Co Dublin. He's even got a tunnel growing grapes. Mind you, I think it's slave labour," she laughs.

"I was determined that my grandchildren would not think that food grew on supermarket shelves, already wrapped," explains Ahern in the new book.

Game of Thrones and Derry Girls actor Ian McElhinney believes that less is more. "You can argue that they have so much more now," he says. "We didn't have all the electronics and gadgetry and mobile phones they have now. But what we did was go out and play, enjoy the outdoors."

His desire for his grandchildren is to be inquisitive, curious and engaged with the world: "With a bit of luck, they will spend their lives working at something that gives them pleasure."

Like most grandparents, jazz and blues singer Mary Coughlan worried about "overstepping the mark" but soon discovered her children were all too happy to have grandma "on call".

She currently lives in the Wicklow mountains with her daughter's family on the same site where they try to be as self-sufficient as possible, growing their own vegetables.

Coughlan confesses they are all worried about the future, in particular towards climate change and some of her grandkids have even become vegetarian.

"I feel that we have let them down and we've let ourselves down with the way we have managed our affairs and the planet. But being optimistic, I think my grandchildren's generation will be the ones who turned it around," she adds.

Having won an age discrimination case against RTÉ in 2018 and having ran for Dáil Éireann in 2020 as an Independent, campaigning for older people, Cox very much believes that grandparents, and all over 65s, still have much to offer society.

"Several grandparents of granddaughters said they wanted them to grow up to be feisty women who stand in their corner.

One such woman is former Fianna Fáil politician Mary O'Rourke, who served as leader of Seanad Éireann. She recalls in the book how her desire to break barriers in a world of men stemmed from an overheard conversation in her Athlone home involving Éamon de Valera, as a child, following an evening of election hustings.

O'Rourke and her sister were sent to bed, with her mother saying "this is a place for men", but the curious seven-year-old sat on the stairs and listened.

Still firmly believing in "a serious work ethic", she advises young people to "be true to themselves, to who they are, and your parents and what they taught you".

While there is concern for the future of the upcoming generation, Cox notes that there is also great "hope, and faith in young people to navigate the special challenges of this era, and find creative and sustaining solutions".

Bertie Ahern alludes to this with his vision of the future of the Irish working week.

"I hope the world doesn't get so sophisticated that it is all about wealth and materialism. I don't think it will – in fact I think for the grandkids' generation, the four-day work week is inevitable. This decade, even," he writes.

"The mixture of work and leisure, the balance, is going to be better for them and for you and me."

Cox encourages children and grandparents to follow her lead and interview their older relatives to store precious memories for the future.

Her desire for her own grandchildren is for them to follow their hearts and lead a life they want.

"Too many young people get bogged down with qualifications and are afraid to take a gap year," she explains.

"They are privileged in a material sense, but the pressure on them has never been harder and we need to give them space."

:: When I Was Your Age by Valerie Cox is published by Hachette Ireland and is available now