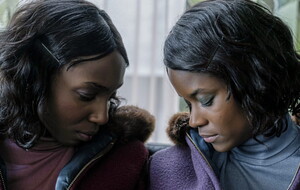 SUCH devoted sisters. Adapted by screenwriter Andrea Seigel from the book by award-winning investigative journalist Marjorie Wallace, The Silent Twins is a stylistically ambitious dramatisation of the true story of June and Jennifer Gibbons, who forged a pact from an early age to speak exclusively to each other.

Growing up in 1960s Wales where they were the only black pupils at school, the siblings wrote copiously in private, immersed in an imaginary world of handmade puppets, which stop-motion animator Barbara Rupik realises on screen in vibrant and naively disturbing vignettes.

Polish director Agnieszka Smoczynska utilises June and Jennifer's written words to chart a haphazard course through the girls' traumatic childhoods, punctuated by psychological and physical abuse, and a turbulent adolescence culminating in charges of arson and petty theft.

The Gibbons sisters distanced themselves from family and peers behind a wall of silence.

June (Mondesir-Simmonds) is born 10 minutes before Jennifer (Baxter) but the younger twin is the dominant personality at home in Haverfordwest, where their father Aubrey (Treva Etienne) – part of the Windrush generation – is stationed as an air traffic controller for the RAF.

The twins refuse to engage verbally with the rest of the clan including their mother Gloria (Nadine Marshall) and older siblings Greta (Amarah-Jae St Aubyn) and David (Hubert Sylla).

Only when they are alone in their bedroom do the girls communicate in a hushed, barely intelligible patois, conjuring fantastical stories and poems with handmade puppets and entertaining fanciful dreams of becoming world famous writers.

He kindles their sexual awakening and June sparks combustible sibling rivalry by pooling dole money to publish her book The Pepsi-Cola Addict.

"You're just jealous," she spits at her sister.

"You're a hack," angrily retorts Jennifer, immersed in her first novel about a physician, who transplants the heart of the family dog into his critically ill baby son.

The siblings are eventually admitted to Broadmoor psychiatric hospital "without limit of time" where journalist Marjorie Wallace (Jodhi May) takes an interest in their case.

The Silent Twins is a surrealistic biopic that lives, breathes (and sometimes chokes) on director Smoczynska's audacious flourishes including a splashy Busby Berkeley-style fantasia replete with synchronised swimmers and introspective scenes narrated in song by Lawrance.

Even when the storytelling falters, the craftswomanship is exemplary, mirroring the brutal tug of war between imagination and harsh reality that alienated the Gibbons from their surroundings, until the sisterly bond was severed by the one force beyond June and Jennifer's control: death.