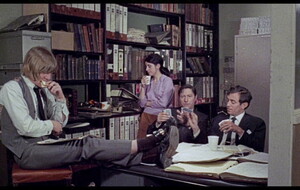 IT'S not every day that a soundtrack leads you to a film, but that's exactly what happened with me and Bartleby.

I first encountered Roger Webb's beautiful score for Anthony Friedman's 1970 film when Trunk Records, the rightly esteemed reissue label who've been doing this kind of cult thing for decades now, released a lovingly curated vinyl edition a while back.

I instantly fell in love with the lazy, pastoral jazz folk and gentle breakbeats that I heard and made a mental note to check out the film itself as soon as possible. That it's taken me so long to actually do that tells you everything you need to know about me and nothing about the quality of the work in question.

A re-imagining of Herman Melville's 1853 short story Bartleby, The Scrivener: A Story Of Wall Street, Friedman's film is a decidedly odd but strangely magical study in social expectations and mental collapse.

Melville's story tells of a young man who throws his work place into chaos by politely declining to do the most basic of tasks and eventually refusing to leave the premises and even eat and this re-telling follows that same path diligently. It shifts the setting to London in 1970 and the occupation of the lead character from lawyer's copywriter to accountant's assistant but the drabness, from dull office décor to the mind numbing repetition of the working week, remains much the same.

In the title role, John McEnery is a ghost of a figure, lurking around the office gently responding "I'd prefer not to" when asked to look over accounts or even to come in to see his boss, played with growing exasperation by Paul Scofield. McEnery is astonishing in such a cold, unemotional role and his passive resistance keeps you watching as the situation for Bartleby falls apart slowly in both a practical sense and a personal one. As an exploration of gradual mental meltdown it's a powerful, if slow-burning, watch.

It's also a brilliant study of office life that still holds up today with all the irritating 'banter' provided mostly by a very young Robin 'Confessions Of A Window Cleaner' Askwith, and general air of boredom and casual bullying being all too familiar to anyone who's ever suffered through the soul crushing drudgery of the modern rat race.

Released on limited edition Blu-ray by Indicator a while back, the film looks beautiful with its drab colours reflecting the life that Bartleby leads in the decidedly unswinging side of the capital. Like Hitchcock's Frenzy this is London as shot through a filter of dirty brown tones. The sun may be shining but this is a cold and unwelcoming place for a loner like Bartleby.

This won't be to everybody's taste of course. Despite its relatively short running time of just 79 minutes, it's a film delivered at a deathly slow pace and there's little in the way of resolution as our miserable lead figure retreats ever further into himself – but there's something mesmerising about Bartleby all the same.

Sad, human and all too relatable it's a true cult gem waiting to be rediscovered. Beautiful soundtrack too.