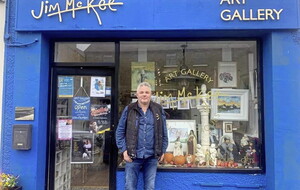 AFTER a Covid-enforced delay, the Jim McKee Art & Antiques Gallery in Donaghmore will hold its official opening next week, when the artist will unveil a new collection of paintings in an exhibition called A Village in County Tyrone.

Having opened the gallery, based a few miles from Dungannon, in December 2020 at the height of the pandemic, the Cookstown-born artist will finally have an opening celebration on December 8.

There'll be music from Cathal and Stephen Hayden on fiddles and PJ McDonald on guitar, a song or two from Malachi Cush and a keynote speech and welcome from Jim's former neighbour, the civil rights campaigner Bernadette Devlin McAliskey.

“I had a vision that one day I’d have my own space to display not only art but also a selection of carefully chosen French and local antiques which I’ve gathered personally,’ says McKee, who has been a professional artist for over 20 years. Fittingly, the first painting he sold was of a scene in Donaghmore, which was bought by since he sold his first painting, ironically of a scene in Donaghmore, to singer Mary Coughlan.

“After 11 years living in the west of Ireland, life brought me back to my native Tyrone, which makes this gallery opening even sweeter as it’s right on my home turf,” says McKee.

As well as his own paintings, including recognisable local landscapes, famous faces and signature cherry blossom and robin prints lining the walls, the gallery contains hundreds of antique collectables.

Many of these were gathered on his travels around the north of France where he spends his summers painting murals in the village of Grenay.

The gallery has already attracted TV cameras from TG4, plus customers from all over the world.

“I had a man from North Carolina who came over for a wedding and had lost his luggage. He called by and I dressed him from my own wardrobe. He ended up buying paintings and antiques which I then shipped over," says McKee.

“I've had musicians pop by from all over Ireland, USA and afar for impromptu gigs, and local characters pop by daily to wile away an hour and have a browse and a chat."

:: The official opening of Jim McKee Art Gallery, 45a Main Street Donaghmore, BT70 3EZ, takes place on Thursday December 8 at 8pm. There will be music, talks, food and drinks and everyone is welcome. Jimmckeeart.com.