Games: The Dark Pictures Anthology: The Devil in Me 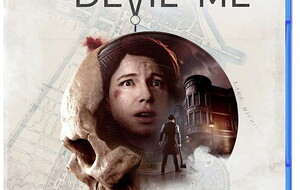 The Dark Pictures Anthology: The Devil in Me (Multi)

HAVING tackled everything from folk horror to war, The Devil in Me rounds off The Dark Pictures Anthology's first season with a Saw-esque true crime potboiler.

Supermassive – masters of mo-capped mayhem – look to the real life (though mostly nonsense) case of H H Holmes, "America's first serial killer", who in the late 19th century butchered many a couple in his Murder Castle - a trap-filled Chicago hotel set up for the 1893 World Fair.

Kicking off with a brief period visit to 1893, where a pair of ill-fated honeymooners spectacularly fail to check out, the action shifts to modern day as our group of documentary makers are lured to a fanatic's replica of Holmes's abode, chock-full of mannequins and littered with booby traps.

Starring Killarney-born Jessie Buckley and celeb-botherer Dennis Pennis himself, Paul Kaye, the fourth in The Dark Pictures potboilers doesn't stray far from the formula, with scripted sequences, quick time events having players mash the correct button on cue and narrative decision-making that can make the difference between life and death.

In the early noughties, Saw came and conquered, popularising horror's torture trend, and Devil in Me lets gorehounds get jiggy with similarly ornate sadism as they attempt to reach the credits with all five characters intact.

The Supermassive formula - invented and never bettered in 2015's Until Dawn – is burnished with new elements. Its cast are much more athletic in their escape plans, and can now use items to progress, giving a classic Resident Evil vibe to puzzles that range from rewiring fuse boxes to moving crates.

They say the devil has the best tunes, and Jason Graves once again brings a thunderingly cinematic score to proceedings, though while it all looks lush enough, Devil in Me is still a few patches away from perfection, with animation and dialogue glitches unintentionally adding to its unvarnished B-movie charm.

Yet if it lacks the supernatural heebie-jeebies of its predecessors, The Devil in Me's funhouse setting is arguably the most craic the series has been, offering a lengthy seven-odd hours of mirrors, sliding walls and gas chambers to navigate either solo or with a pal in tow.

Full of knowing winks and playfully tropey, it's another shoo-in for some co-op carnage with your significant other. Even if it doesn't quite reach the horror highs of Until Dawn or last year's camp offshoot The Quarry, The Devil in Me is a fitting finale to The Dark Pictures' first season - though future games have their work cut out to stave off the creeping blue mould.