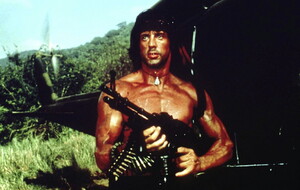 RAMBO is 40 and Studiocanal have released a collector's edition steelbook Blu-ray of the 1980s action hero to celebrate.

First Blood was the first, and best, in the franchise. Despite the passing of four decades since its cinema debut, there's something quiet magical about the adventures of John Rambo, the brave Green Beret who returns from Vietnam with a serious grudge against his superiors and society in general.

With all the increasingly cartoonish sequels that followed. it's easy to forget how gritty and grimy this first outing for that ultimate 80s action hero really was. Along with Rocky, Rambo was Sylvester Stallone's defining early role – and, as both star and co-writer, the mumbling main man must take most of the credit.

He's magnetic here as the disillusioned Vietnam veteran and his rage at how his fellow soldiers are treated on their return from conflict still packs a considerable punch today.

Of course, it was really the more ramped-up sequel to this, 1985's Rambo: First Blood Part II, where our mean and moody hero returns to the scene of his trauma, that made the character a proper icon of 80s bluster and pent-up male rage – but First Blood is the better film on every front.

The classic revenge movie loner, Rambo seeks out an old army buddy only to find he's passed on from the effects of the deadly Agent Orange he's been exposed to in conflict. Matters take a turn for the worse when a brutal local cop (played by the great Brian Dennehy) wrongly lifts Rambo for vagrancy and chucks him into a local cell, where he gets a severe beating.

Making his escape, our traumatised soldier makes for the woods where he hides out as the authorities try to recapture him. It seems the only figure able to do that is his old commanding officer, Colonel Trautman, played by Richard Crenna.

All-in, this is a classic 80s action film full of grunting male characters all acting out the macho man stereotypes of the time. In many ways, that's what makes it great. It's like a window into a long gone era of endless brutality, wild violence and non-CGI explosions.

There's little of the wit and knowing nods to camera you'd get in a similar effort these days, just the relentless thud of punches landing and bones crunching, but that's to its credit, really. Director Ted Kotcheff handles the downbeat mood well and there's none of the silly, over-the-top Reagan-friendly nonsense that would blight most of the follow-ups.

The much mocked Stallone is electric here and his performance as the mumbling everyman who can take no more feels fresh and inspired at this point.

This 4K Ultra HD Blu-ray Steelbook release is packed with extras and interesting background material but, as always, it's the film itself that you'll come back to.

Dark, moody and powerful it's a fascinating study of a divided and broken America that's clearly lost its way. It may have been made in 1982, but it seems oddly on the money today if you ask me.