As the Foyle Film Festival prepares to return to Derry, we take a look at some of the highlights from this year's programme... 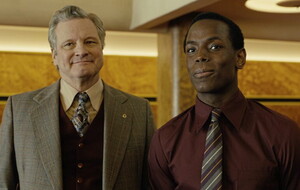 Colin Firth and Michael Ward in Empire of Light

THE Foyle Film Festival will return to Derry next week for another celebration of cinema.

Running from Friday November 18 to Sunday November 27 at Brunswick Moviebowl and The Nerve Centre, the 35th festival will open with the Northern Ireland premiere of Disney's Strange World.

The animated adventure follows a legendary family of explorers, the Clades, as they attempt to navigate an uncharted, treacherous land, alongside a motley crew including a mischievous blob, a three-legged dog and a slew of ravenous creatures.

The festival's closing night gala will be the NI premiere of Empire of Light from Academy Award-winning director Sam Mendes. Starring Olivia Colman, Michael Ward and Colin Firth, the film is set in an English seaside town in the early 1980s for a powerful and poignant story about human connection and the magic of cinema.

The festival's Oscar and Bafta-affiliated Light In Motion (LIM) Short Film Competition will showcase the best films from around the world with a total of 68 films in contention for Best International Short Film, Best Irish Short Film and Best Animated Short Film.

Recipients of the LIM Awards qualify for consideration in the Live Action and Animated Short Film categories of the Academy Awards without needing the standard theatrical run.

In Dreams Are Monsters: A Season of Horror Films will feature Nia DaCosta's Candyman (2021) followed by a discussion on women in horror curated and presented by Dr Victoria McCollum and Aislinn Clarke, co-editors of Bloody Women: Women Directors of Horror, and an immersive screening experience / slasher style slumber party presentation of A Nightmare on Elm Street from In Your Space Circus.

Festival favourites Cinematic Breakfasts and Dementia Friendly Screens return, while a collaboration with Foyle Foodbank will offer a series of Foodbank Screenings where patrons are encouraged to donate food instead of the usual ticket fee.

Other special events include the Northern Ireland premiere of In the Name of Gerry Conlon from photojournalist and director Lorenzo Moscia, winner of the audience award at this year's Biografilm Festival, with Introduction by Paul O Connor from Pat Finucane Centre.

In collaboration with Bloody Sunday Trust, Foyle Film Festival also presents a screening of Sean Murray's short film, My Name is Joseph followed by a screening of Ken Fero's feature documentary Ultraviolence, all commemorating the 50th anniversary of Bloody Sunday.

"We are also proud once more to present our Oscar-affiliated Light in Motion Short Film Competition with packages screened in the Irish, International and Animated categories. We look forward to welcoming the audiences back once again and engaging with cinema together."

Caoimhin McClafferty from Brunswick Moviebowl says: "As Foyle Film Festival and Brunswick Moviebowl celebrate 10 years of partnership, we are proud to celebrate the festival highlights and titles from the past decade such as Disney previews of Frozen, Moana, Big Hero 6 and The Good Dinosaur, in addition to guest screenings with Richard E Grant, Ray Winstone and Danny Boyle.

"We look forward to celebrating many more in 2022 and beyond."

:: Films will be screened at both Nerve Centre and Brunswick Moviebowl with prices ranging from £4 to £7. Tickets and full programme of events available at foylefilmfestival.org.

Ulster Museum at 50: How their collections are helping to shape our shared future