Arctic Monkeys leader Alex Turner discusses the band's new album, The Car, where the Sheffield act's future lies and his ever-evolving relationship with their old material... 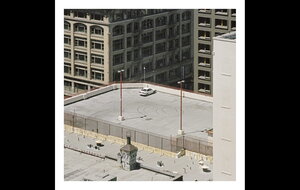 IN THE two decades since they formed in Sheffield, Arctic Monkeys have evolved from indie upstarts to stylish retro-rockers with a penchant for vintage pianos and high concepts.

It's been a gradual process, but one that has seen the clattering guitars of barnstorming hits such as I Bet You Look Good On The Dance Floor and 505 firmly dropped in favour of lush strings, smooth jazz and soul.

The Car, the band's seventh album, was pipped at the post by Taylor Swift's Midnights in the battle for number one last week, ending a run of consecutive chart-topping studio records which began with 2006's debut Whatever People Say I Am, That's What I'm Not.

The Car completes their latest transformation, refining the template set by its predecessor, 2018's Tranquility Base Hotel & Casino – a concept album about a luxury resort on the moon.

"I would imagine at some point there was an intention to not go anywhere near science fiction-sounding things with this record – in the lyrics or the music," he says, picking up the phone amid studio sessions for a special recording destined for radio.

"We may have successfully evaded science fiction in the music side," he adds with a laugh.

"But there are actually a few instances where a bit of that language hangs over from the last one, probably more than I even realised.

"There's plenty about it that feels different to me from the last one. There's a progression in the dynamics of the whole thing. Perhaps it executes those ideas more effectively."

I ask if The Car is a spiritual successor to Tranquility Base – the creative process began in the same room in Los Angeles before his move back to London.

"I wouldn't put up that much of a fight against that. I can't emphatically subscribe to that idea but I can't totally oppose it either."

Work on the album began in earnest in summer 2021, when the band came together at Butley Priory, a 14th century monastery in a remote part of Suffolk.

"That was the first time we had been back together all at once, for what felt like a really long time," he explains.

"There may have been time between the end of the tour in 2019 and the session in Suffolk when we were all together but it was really swift.

"It felt like we hadn't had that energy that you get with the collective for a really long time. Definitely the excitement was palpable."

On The Car, Turner sings of jet skis, photoshoots and mirrorballs, a dusty and creaking vision of fame – and a more grown-up version of the adolescent angst of early Arctic Monkeys records.

"There are important parts of this record that are instrumental and often in the writing process they preceded a lot of the lyrics certainly, or any of the vocal ideas," he offers.

"The top of the record starts with one of them. There's a few of them right throughout the thing.

"It sometimes feels like those bits have aspirations outside of a pop song – and the record is me dragging them back towards a pop song."

He adds with a dry laugh: "That's what I would put in my review anyway."

Just a few months ago the band played a pair of confident, relaxed headline sets at Reading and Leeds festivals, prompting rave reviews.

The crowd was largely made up of teenagers too young to have experienced the band during its formative years – a new generation presumably converted by 2013's chart-conquering AM.

Some tracks from their early days still feature in their sets, such as the mosh pit-prompting …Dance Floor.

"It really depends," offers Turner, when asked how his relationship to those songs has changed.

"I suppose that [Dance Floor] has never really been benched. It's always been in there so it's evolved incrementally over the last 15 years or whatever.

"The version of Dance Floor now, it almost feels like that one is a separate thing because it's just always in there. Some of the other ones we rested for a while.

"This summer we were playing Ritz To The Rubble and it felt like that doesn't come as naturally as it once did.

"There have been moments where it has felt like you are doing a cover, but I don't think it feels like that any more. We have gone through that phase possibly. It's something else now.

"I've been really enjoying doing that song and nothing's really off the table at this point as far as what's going to go in a set," he adds.

He jokes that, at 36, he is getting a little out of breath during the heavier, more energetic tracks.

"Sometimes some of them just take a minute to figure out how to play it again now at this point. And that's fine. Sometimes it just takes a little bit of wrangling."

Turner says it's rare that he ever looks back at the Arctic Monkeys' catalogue as one cohesive whole.

"There was a time before this record where we were listening to some of the other ones to try and get an understanding," he says.

"But when you do that it doesn't, to me anyway, seem that dramatic a shift between them all.

"Maybe if you look at the show, it would probably look really different over the years, but I've never done that. And even that, it's happening over 200 nights. It changes into something else.

"I don't think it's a 'sit down in the boardroom and this is what we are going to do now' sort of thing. It's all gradual.

"When you listen to the records back to back – like I said, it's not something that I do quarterly, but I have given some attention to that twice maybe in the last 15 years – it all seems like it's the same band to me. But you may disagree with that."

Currently embarking on another mammoth tour – which may eventually include a rumoured headline slot at Glastonbury 2023 – and another hit album: where do Arctic Monkeys go from here?

"I suppose it depends on how you are looking at it," he reflects.

"I don't think I've thought about it like that – if I ever did – for a really long time. Because I don't know if that is how it works in this band.

"To think about it like that is almost as if the big show is some sort of trophy, which it doesn't feel like it is – or ought to be.

"To suggest there wouldn't be anywhere to go after playing Glastonbury for the first time suggests it's this trophy that you're going to put up. I don't think it feels like that from where I'm standing."

:: The Car is out now. Arctic Monkeys will play Dublin's Malahide Castle on June 20 next year.

Comedian Rob Beckett on bringing Wallop! to Belfast and Derry