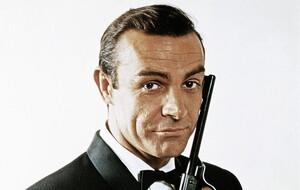 The original James Bond movie might not be the best, but it still stands up 60 years later

DR NO is 60 and to celebrate that significant birthday for the very first James Bond cinematic adventure Warner Bros have released a lavish new Steelbook Bluray edition of the film.

In fact, calling it 'lavish' barely does this package justice: this is the last word on the 1962 movie that set the Bond bandwagon rolling and all stops have been pulled out to make this version of the oft-released classic the definitive one.

That means refreshed visuals, an audio commentary from director Terence Young, a raft of making of documentaries (both period and newly commissioned) and a selection of paper additions including lobby cards and a fold-out theatrical poster for fans to pore over.

Perhaps most intriguingly, there's even a Dragon Tank buildable cardboard replica that presumably you can assemble and leave to gather dust on a study shelf somewhere.

Take away all the baubles and bows of the fancy re-issue programme though and how does Dr No fare as both a Bond film and a straightforward action adventure? Well, it stands up surprisingly well, actually. Despite getting little of the retro love afforded to later adventures in the series from Goldfinger to Live And Let Die, this first outing for Ian Fleming's sneering secret agent works really well as a straight-ahead spy adventure.

Maybe the fact Sean Connery is underplaying it rather than acting up to the heightened reality that some of the later films gloried in helps it stay grounded as a taut little thriller. Perhaps it's the lack of excess in the filming – there's essentially one memorable location used here and the villains are extreme but not as wildly over-the-top as they'd be as the series expanded through the 60s and beyond – that makes it work. Either way, work it does.

Connery is, of course, agent 007, sent to Jamaica to investigate the mysterious murder of one of his fellow spies. He swiftly discovers that the island is now being used as a base for a high-tech terrorist organisation called SPECTRE who, with the iconically garbed and reassuringly mad Dr No (Joseph Wiseman) at their helm, have created technology to divert Western rockets launched from Cape Canaveral.

Connery, a jobbing Scottish actor finally getting his big break, oozes laid-back charm from the off here as he slides into the role of the cold-hearted killer of Fleming's casually nasty novels with impressive ease.

There are some iconic Bond moments to savour – none more so than the sight of a bikini clad Ursula Andress emerging slinkily from the sea, of course – but very little in the way of spectacular set pieces. This is a grittier, less camp, spy caper on every front – and it's all the better for that, in my opinion.

Less cartoonish than you probably remember it, Dr No isn't the greatest espionage epic ever made or even the best of the Bond franchise, but it's still a hugely enjoyable experience six decades on. This extravagantly appointed re-issue is the perfect way to remind yourself of its game-changing magic one more time.