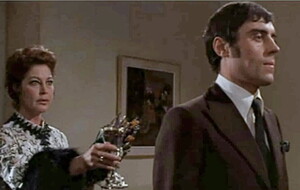 Tam Lin was released as The Devil's Widow in the US

REGULAR readers of this column will know of my long term passion for the BFI's Flipside imprint.

For years now it's ensured that long lost, mostly forgotten and often startlingly brilliant British films have made their way out into the modern world after sometimes decades of lying unloved in film canisters the world over by reissuing them in beautiful new, extra festooned, Blu-ray editions.

Tam Lin, a largely neglected Celtic curio from 1970, is just the latest release on Flipside and it's another pure gem of cult genius. You want reasons? Well how about these for a start? It stars old school Hollywood goddess Ava Gardner as a sinister senior seductress who lures a gang of Carnaby Street clad teenagers into her weird and dangerous world of black magic.

Among that crowd of typical late sixties 'crazy kids' are future Dynasty Diva Stephanie Beacham and the great Ian 'Lovejoy' McShane. The impressive cast also features familiar figures like Cyril Cusack and Richard Wattis who add a little theatrical gravitas to proceedings. Look closely and you'll even clock an early screen performance from Joanna Lumley – look closer still and you might just spot future Withnail & I director Bruce Robinson in a rare acting role as well.

The key player in this strange and really rather wonderful fantasy film is Tinsel Town superstar Roddy McDowell, though. This is the only film the Planet Of The Apes star directed and as a bewitching slice of folk horror blended with swinging 60s pastiche it's a truly remarkable piece of work.

Based on the Robert Burns poem of the title, the story centres around the enigmatic McShane (here playing a character with the presumably more palatable to American audiences name of Tom Lynn) who's having an affair with the rich Michaela Cazaret (Gardner) and hanging out, as plenty of other groovy kids are, in her palatial countryside mansion.

When Tom spies the local vicar's daughter (Beacham) and his attentions start to wander from the witchy Michaela, the spurned lover resorts to magic to get her way.

McDowell captures all this excessive bed-hopping and swinging activity with a real vitality and the film, shot by future Ghandi cinematographer Billy Williams, looks glorious throughout. Released as The Devil's Widow in America, it perhaps never quite delivers the horror needed to make it a hit in 1970 and generally seems to fall back into artiness too easily. Maybe that's why it failed to find an audience at the time, but watching it today that artfulness is a real plus point and Tam Lin feels like a lost classic with plenty to say about the era in which it was made and the sexual politics that exploded at the time.

Flipside, as always, have delivered a glorious high definition transfer here that is simply dazzling to watch and there are the usual array of intriguing extras included to make this an essential purchase.

Gardner is great as the ageing seductress and it feels like a real shame that McDowell didn't make more features after this. A strange, folky freak out of a film, it's fantastic to see it out in the world one more time.