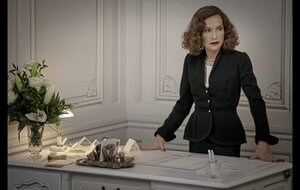 Polished to a heart-warming lustre by four screenwriters, Mrs Harris Goes To Paris merrily trades in old-fashioned British pluck and charm, transplanting a kind-hearted cleaning lady from the streets of south London to the arrondissements of the French capital in the grip of a refuge collection strike.

The resilient heroine's dearest wish – to wear a Christian Dior dress to her local Royal British Legion's forthcoming social – requires a nimble leap across class and language divides guarded by Isabelle Huppert's snooty fashion house director, who mocks the idea of haute couture draped on someone like Mrs Harris.

"You are nobody, invisible. How will you give this dress the life it deserves?" she chuckles.

Evidently, the grand dame hasn't read Charles Perrault's 17th-century take on Cinderella, Cendrillon Ou La Petite Pantoufle De Verre, or she would recognise that she is playing the wicked stepmother in a cleaning rags-to-riches fairytale and no amount of cruelty will prevent the title character from going to her ball at Battersea Town Hall.

In the course of her duties, Ada fixates on Lady Dant's £500 Christian Dior dress.

Times are tough for designer Dior (Philippe Bertin) so his team reluctantly accepts Ada's rolls of cash in exchange for a one-of-a-kind creation that requires a series of fittings and an unexpected stay in Paris with accountant Andre Fauvel (Lucas Bravo).

"You don't get this hoo-ha when you buy a frock down Woolworths," clucks Ada as she casts a spell over the ailing fashion house and its denizens including model Natasha (Alba Baptista) and widower Marquis de Chassagne (Lambert Wilson).

Like its exuberant title character, Mrs Harris Goes To Paris has no pretentions beyond delivering warm, comforting hugs between words of affirmation and empowerment.

Never underestimate a nobody.