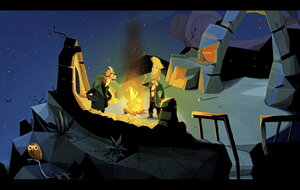 WHEN George Lucas decided to explore videogames in the late 1970s, it was a stroke of luck that Atari held the rights to Star Wars – forcing his newly-minted LucasArts to develop all-new material. The company hit a rich vein of point-and-click adventure success in the late 80s, and unlike arch-rival Sierra's punishingly dry output, LucasArts titles like Grim Fandango, Sam & Max and, of course, Monkey Island, were like hitting the pub with your funniest mate.

Back in 1990, the original Monkey Island entered gaming legend with a tale of Caribbean pirates big on in-jokes, Easter eggs and references to everything from Star Wars to Herman's Hermits. Coming on eight floppy discs (and a code wheel to, ironically, combat piracy), it spawned four sequels, but with diminishing returns the series fizzled out this century.

Now original developer Ron Gilbert – who jumped ship after the second game – is back with more monkey business, so batten down the mizzenmasts for a frothy grog that has everything you'd expect of a series borne from the golden age of adventure.

Initially playing as series star Guybrush Threepwood's son, the game is presented through flashbacks as our now middle-aged hero returns to Melee Island on the hunt for the elusive secret of Monkey Island. Does he have one more adventure in him? The answer is a resounding "Aye Aye!"

While you don't need to have played previous games to enjoy, a barrel-load of classic characters return in a tale of oddball pirates, ghostly figures and surreal goings-on in the lawless Caribbean.

New destinations include Terror Islands and the timber-shivering Brrr Muda while its classic gameplay of collecting items, conversations and combine-A-with-B puzzles is streamlined for ultimate user-friendliness, with options popping up whenever the cursor is hovering over anything of note. Soaked in self-referential humour, its 10-hour runtime is a pitch-perfect lesson in puzzles, characters and groan-worthy dad jokes.

Ever since its reveal, Return's sharp, angular look has drawn fiery criticism from keyboard warriors, yet the kids' pop-up book style fits like a pirate's hook. Along with Gilbert, nearly all of the original's voice cast have returned, along with its composers, ensuring a game that's dry-aged in nostalgia for the superior early titles.

Beautifully written, wonderfully acted, and finely scripted, Return to Monkey Island is like picking things up with a long-missed friend, offering classic point and click fun for a generation whose bones now click when they do almost anything.