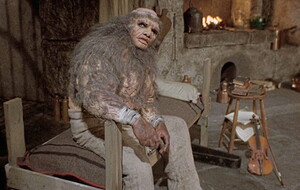 Frankenstein and The Monster from Hell

LAST week in this column I was waxing lyrical about Second Sight's lavish Blu-ray release of The Mummy, a prime slice of ghoulish Gothic glee from Hammer films in the full flush of their late 50s purple patch.

This week, I'm fast forwarding a full decade-and-a-half to the time when the House Of Hammer was pretty much condemned for Frankenstein and The Monster from Hell. If the studio tapped with great financial success into a public appetite for colourful gothic escapades in the 1950s, it was floundering badly at judging the public mood in 1974, peddling out fairytale fables to audiences whose taste in big screen horror had long since moved onto the more modern thrills that Don't Look Now and The Exorcist could offer.

Monster from Hell, actually shot two years before it finally emerged in 74, certainly isn't a bad film – there's much for any fan of classic horror to savour here – it's just so badly out of time and threadbare where once the studio's productions looked and felt so lush and extravagant.

Setting the negatives of pitiful budget and minimal public response aside for a moment, let's consider the cult positives on offer here from the studio's seventh and final adventure with the dubious Doctor.

We've got the king of Gothic directors Terence Fisher behind the camera one last time for a start, and the film boasts all the stately pacing and classic storytelling traits that make him so beloved of horror fans the world over.

It's also got Peter Cushing, a full 17 years on from his first turn as the cadaver compromising madman in The Curse of Frankenstein, and that's always a massive boost for any fantasy film project. He may be painfully thin here and the wig he's given makes him look like a little old lady coming back from the bingo, but he still imbues the role with a gravitas all his very own.

There's also a pleasingly hefty role for 70s scream queen Madeline Smith as the Doctor's (mostly) mute assistant and a central turn from English bodybuilder Dave Prowse (who would go on to star as Darth Vader alongside Cushing in Star Wars a few short years later) as the monster itself.

The plot sees a young doctor, Simon Helder (Shane Briant), thrown into an asylum when he's caught trying to revive the dead. There he stumbles across an aged inmate who turns out to be none other than the infamous Dr Victor Frankenstein. Helder helps Cushing, now running the place in all but name, to re-animate the beast-like Prowse – with predictably beastly results.

The budget may be minuscule and the sets creaky and unconvincing, but Cushing and company still shine. The gore quota is heavy and the mood fatalistic. The result is a dark and nihilistic retelling of a familiar fantasy tale.

Second Sight have included a wealth of extras, from cast commentaries to a soft cover book and some fine documentaries, which help paper over the cracks in production standards and make this an essential purchase for 70s horror and gothic fans alike.