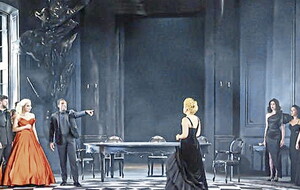 Northern Ireland Opera’s production of La Traviata is the first opera to return to the historic Grand Opera House since its restoration. Picture by Neil Harrison

We returned home after seeing Northern Ireland Opera's superb new La Traviata with the energy you get from a great production. It was truthful, inventive, with dazzling set and costume designs and a very moving final death scene.

Verdi's Violetta expires in an ecstasy of emotion, more dramatically than, say Mimi in La Bohème. And Siobhan Stagg, whose beautiful voice gave us terrific accounts of the super-emotional arias, rose to the challenge.

You know you're in good hands when the best known music seems reinvented.

Perhaps the most famous song in La Traviata is the drinking number, aka Brindisi. It's got a rollicking tune which was delivered with spirit by the NI Opera chorus.

My favourite interpretation might be Renée Fleming's, while Maria Callas on YouTube remains tragic and passionate. Stagg was tremulous, full of delicate enjoyment and overcome when her beau to be, Alfredo (handsome and vocally assured star American tenor Noah Stewart), joins her and creates a duet. It was memorable.

What was particularly clever was Menzies's staging and in the party scene, we got a range of stylish characters, dressed as if from a contemporary period, maybe last week, maybe a few decades ago.

This underlined the universality of Verdi's work and mitigates against the idea that opera, a genre full of artifice, can't speak to people today.

As the great Ukrainian baritone Yuri Yurchuk, who played Giorgio Germont, Alfredo's father, told me, this production majors in psychological truthfulness: "Cameron wanted us to know why were doing things".

This was clear in De provenza, Georgio's diktat to his son about the unwisdom of his romantic course.

The direction was positively filmic at times. Niall McKeever's set had atmospheric figures or shapes around the ceiling. These might have been ghosts or just symbols of disintegration.

For Violetta is headed down a one-way street and this is a society in moral turmoil. But it is the music that counts and conductor Rebecca Lang with musicians from the Ulster Orchestra gave us a rendition of Verdi's harmonic world that was both sensitive and dramatic.

Verdi's plot, taken from a novel by Dumas, reflects that. Giorgio, the father who wants to break off Alfredo and Violetta's affair as it is affecting his status and his daughter's wedding prospects, only cares about money and success.

There was costume colour coding too. The partygoers were in black, Violetta, our hedonistic heroine, was initially in red with a fabulous figure-emphasising dress by Linda Britten.

Later, as Violetta faded, she wore black, her replacement on the merry go round of pleasure, Flora, sported brilliant orange.

One tiny spoiler was the occasional failure of the surtitles, although you got the meaning via the music anyhow and the translation wasn't that great. The staging of the second act may have been more thoughtful than dramatic but works very well, almost reminiscent of drama of the same period.

But if you want to know about love and loss and the nature of relationships, as well as how unwise it is to meddle in other people's love affairs, this La Traviata is for you.

:: La Traviata by Northern Ireland Opera continues at the Grand Opera House in Belfast on September 15 and 17.